I am a total Scrooge when it comes to the holidays. Halloween is the last great day of the year in my opinion. After that I just hold on until Martin Luther King Day. It’s the usual rant of course. I hate that the holidays are all about consumerism. I could use a new digital camera because mine broke last week, but that is the extent to which I will participate in these holidays. Virgin Mobile is trying to sell some cell phones during the holiday crunch. In fact, they have decided that they will create a brand new holiday called Chrismahanukwanzakah that will maybe appeal to…well I don’t know, agnostics maybe? There is no holiday for agnostics after all. Their ad campaign includes a cast of characters that can only be described as freaks. This includes a Hindu Santa Claus, and a pair of Hasidic Jews that sing about a dreidel made out of meat that they will eat and poop out. If you see the commercial on TV you will see that the Hindu Santa Claus plays to stereotype. The clip on the website is even lamer. Here are the lyrics: 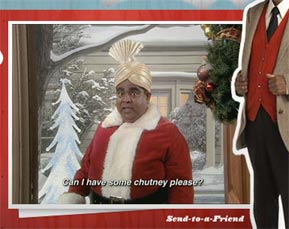 You know, cause a Hindu Santa Claus would be a chutney eater. Ba humbug.