In 1998, Nidha Mubdi, a student at St. John’s University in New York, discovered during a routine checkup that she had leukemia. After much searching through SAMAR, a donor named Himesh Kapadia stepped forward: 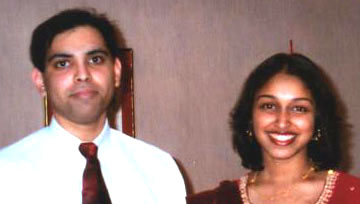 The bone marrow donation saved her life, but Mubdi’s kidneys began failing because of chemotherapy, and she’s been on dialysis for the last five years. But earlier this month, Derek Ivery, a friend from Queens College, gave her one of his kidneys, a much more serious operation: 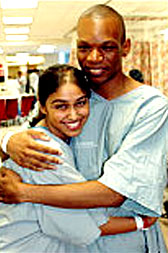 Mubdi’s family members were tested to see if they could donate a kidney, but no one came up as a match. [Link]

Ivery, of Queens, decided to step forward after Mubdi put out a call for a donor on the Internet. They had met when when they were student advisers at Queens College… Mubdi’s grateful father, Shelley Mubdi, a Bangladeshi immigrant who is president of Medina Masjid, a Manhattan mosque, called Ivery, a “courageous man…”

p>So far, the transplant appears to be a success:

“Her new kidney is working perfectly normally,” Hardy said yesterday, noting that Mubdi has begun to urinate – a sign the transplant was a success.

Doctors will be on the lookout for symptoms of organ rejection, but Mubdi should be out of the woods in six weeks and able to live a normal life, Hardy said. [Link]

p>Ivery’s first thoughts were for his buddy:

These days have been uncommonly mild for autumn, but Derek Ivery insists on wearing a sweater and jacket over his tall and very thin frame. He cannot get sick. [Link]

“I feel a little bad because she’s in a little more pain than I am,” Ivery said. “Because of all the medication she’s been on, she couldn’t get all the anesthesia that I had.” [Link]

p>Thanksgiving indeed. Mubdi graduated from Queens College last year. Here are photos of her family celebrating her survival five years after her bone marrow transplant. Here’s how to register in the South Asian bone marrow registry.