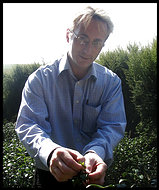 Even as some people are finding more and more tasks to outsource to the subcontinent, a few wily Brits are bucking the trend:

Beyond the four-mile-long driveway, and the shaded path named “Lady’s Walk” and the soft fields of purple rhododendron and grazing Holstein cows, Jonathan Jones walked among waist-high rows of rich green plants. With loving precision, he plucked off two perfect green leaves and a bud and held them proudly in his hand.

“English tea should be grown on English soil,” he said, running his fingers over what he called a victory for horticulture and also for British culture: the first commercial crop of tea ever grown in this tea-mad nation.  [link]

p>Jones is working with Evelyn Boscawen, an aristocrat descended from Earl Grey himself, to bring locally-grown tea to the British.  Some of you may remember that the Earl Grey blend of tea has subcontinental roots:

The blend is named after Charles Grey, 2nd Earl Grey, who reputedly received a gift, probably a diplomatic perquisite, of tea flavoured with bergamot oil. The legend usually involves a grateful Chinese mandarin, but this blend of tea was first made from fermented black Indian and “Ceylon” (Sri Lankan) teas, though over the years many other varieties have been used.

The tea proved so popular in the Prime Minister’s drawing room that his tea merchants, Twinings in the Strand, were given a sample and asked to come up with a close match. Twinings sold the first “Earl Grey’s tea” in the British market. Twinings Earl Grey blend includes China tea, Indian Darjeeling, Ceylon, and a hint of Lapsang souchong, a strong, “smoky” black tea. [link]

p>Now that the sun has set on the British tea-growing empire, Jones and Boscawen apparently figured it was time to take a second look at the fertile soils of Mother England:

Having done globetrotting research on camellia sinensis, the green bush that produces tea leaves, Jones said he learned that there are many myths about tea, including that it grows only in warm weather. In fact, what really matters, he said, is that there is no frost. He noted that the Cornwall estate has comparable temperatures to Darjeeling in the Himalayan foothills, which produces world-famous tea. [link]

Will Cornwall become the next Darjeeling or Nuwara Eliya?  Probably not anytime soon.

In former British colonies such as India and Sri Lanka, the bushes grew so effortlessly and their leaves were plucked by laborers so cheaply that it has always been more profitable to grow tea abroad, then ship it back to be blended in English factories and packaged as English Breakfast or Earl Grey.

But more than once, the English have thought how nice it would be to stop relying on fields half a world away, Jones said, noting that Winston Churchill was deeply worried during World War II that rationing caused by disrupted tea supplies would hurt morale.

The new Tregothnan tea is exceedingly expensive. Loose blended tea runs about $10 an ounce, and a box of 25 bags costs $18. By comparison, Tetley’s popular package of 80 tea bags sells for less than $3. But in an era when people pay $4 for a cup of coffee, the upscale specialty goods chain Fortnum & Mason has bought the novel crop and begun selling it in stores.

“It’s a rare tea,” remarked Jones, who said that he hopes to expand his current crop of 20,000 plants on 20 acres to 100 acres. Still, he said, he had no illusion it would ever be more than a niche market. [link]

For those of you in the niche, a soothing cuppa Cornwall can be ordered here.

One thought on “The Empire Kind of Strikes Back”