Henna hands on subway stops, brought to you by the bankers of Hong Kong and Shanghai. Oh look, it’s just like South Asian fiction covers 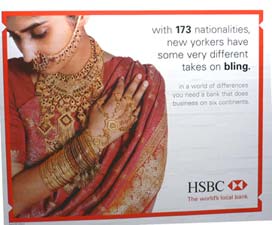 Trite but cute. The first ad actually sets up an artificial duality. I’ve got female friends who’ve flirted with a Delhi wedding while living among the Japanese hipsters of that ‘hood. The punks of St. Marks Place are more taken with piercings — mehndi is no longer mutinous.