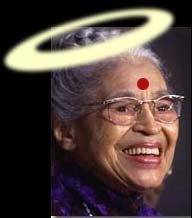 Martin Luther King Jr…. was inspired by Mahatma Gandhi, who led the peaceful struggle for India’s independence from Great Britain. King’s work was helped in the civil rights movement by such people as Rosa Parks who served as a catalyst for the Montgomery, Alabama, bus boycott. [Link]

40,000 people walked, some more than 20 miles, during the Montgomery bus boycottOn Montgomery buses, the first four rows were reserved for whites. The rear was for blacks, who made up more than 75 percent of the bus system’s riders. Blacks could sit in the middle rows until those seats were needed by whites. Then the blacks had to move to seats in the rear, stand or, if there was no room, leave the bus. Even getting on the bus presented hurdles: If whites were already sitting in the front, blacks could board to pay the fare but then they had to disembark and re-enter through the rear door…

“Don’t ride the buses to work, to town, to school, or anywhere on Monday,” the leaflet said… Some blacks rode in carpools that Monday. Others rode in black-owned taxis that charged only the bus fare, 10 cents. But most black commuters – 40,000 people – walked, some more than 20 miles…

Churches and houses, including those of Dr. King and Mr. Nixon, were dynamited… snipers fired into buses as well as Dr. King’s home, and bombs were tossed into churches and into the homes of ministers. [Link]

The added bindi, Razib’s idea, is homage: ‘… Rosa Parks looked like our grandmothers…’