I sometimes hang out at Brad DeLong’s blog, where apparently Razib thought I was a dude. Yesterday DeLong wrote a 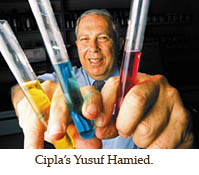 post about Tamiflu, the Roche patented drug which is the one of the only plausible defenses against the dreaded Avian influenza or Asian Bird Flu. DeLong was mostly concerned with the domestic policy and economic ramifications of nationalizing a patent in times of emergency and stockpiling a drug ahead of time, but as with Sepia Mutiny, the comments can be most educational–and that’s how I found out that clever Cipla is at its Robin Hood reverse engineering tricks again. Bird flu is, of course, a global issue:

Cipla, an Indian producer of generic drugs, is preparing to become an alternative producer of oseltamivir phosphate, an antiviral drug better known by the brand name Tamiflu.Cipla plans to offer Tamiflu in the Indian market and in 49 less-developed countries where the company already sells AIDS treatments, Hamied says. The legality of the introduction in India, where pharmaceutical patents started to be recognized this year, is uncertain.

Hamied says he will withdraw Tamiflu from the Indian market if Roche’s patent is recognized.  (Link.)

A Roche spokesman, Terry Hurley, said that the company ”fully intends to remain the sole manufacturer of Tamiflu.” . .Making the drug involves 10 complex steps, he said, and the company believes that it’ll take another company ”two to three years, starting from scratch,” to produce it. Hamied dismissed that claim, saying that he initially thought it would be too hard but that his scientists had finished reverse-engineering the drug in his laboratories two weeks ago. He said he could have small commercial quantities available as early as January 2006. Asked if he thought Hamied was making an idle boast, Hurley declined to comment. Hamied said he would sell generic Tamiflu ”at a humanitarian price” in developing nations and not aim at the US or European market. ”God forbid the avian flu should strike India,” he said. ”There is no line of defense.” (Link.)

What does this have to do with mangosteens? I’m glad you asked!

DeLong commenter DuckedApe pointed out an Independent article (original link, readable copy) about how Tamiflu has a key raw ingredient that is primarily available in large quantities from a species of Chinese star anise:

But the herb has a vital function as the source of shikimic acid from which the drug Tamiflu is made, the only defence the world currently has against the threatened flu pandemic. . . .Yesterday it emerged that a shortage of star anise is one of the key reasons why countries including Britain cannot obtain enough Tamiflu to protect their populations. The herb from which Tamiflu is made is grown in four provinces in China and “huge quantities” of its seeds are needed, according to the Swiss pharmaceutical manufacturer Roche. It is harvested by local farmers between March and May, purified and the shikimic acid extracted at the start of a 10-stage manufacturing process which takes a year. Only star anise grown in the four provinces of China is suitable for manufacture into Tamiflu and 90 per cent of the harvest is already used by Roche. (Link.)

Hamied is aware of the problem: .

But Cipla has neither produced the drug in large quantities nor is able to predict whether its price will be much lower than Roche’s “You must understand one thing: Our synthesis starts from shikimic acid, and it’s not native to India, so we must get it from outside,” Cipla Chairman and Managing Director Yusuf K. Hamied says. (Link.)

Once you have the shikimic acid, the process to make Tamiflu is extremely complex and even involves an explosive step similar to one in AZT manufacturing. It seems that what Cipla has reverse engineered is this post shikimic acid process. Roche has developed a “fermentation route” to manufacturing the shikimic acid, and it seems that Cipla has not yet reverse engineered that. It makes sense that harvesting the raw material might be cheaper than synthesizing or even growing it in vats of E. Coli.* So I got to wondering–what other plants even contain shikimic acid? (I’m, uh, taking Roche’s word for it that “only” the star anise which Roche happens to have a lock on could possibly be useful.)

Eye-straining KosmicJourney.com listed it in the leaves of our familiar rice plant, but I’m a sucker for .gov databases and when I found Dr. Duke’s Phytochemical and Ethnobotanical Database at ARS-GRIN.gov** I was thrilled to see what plants came up for Shikimik Acid. It seems that small amounts are available from prickly pears, the leaves of the mastic tree, and India’s own haritaki fruit. The motherlode of a possible 700,000 ppm, however, comes from the leaves of one Mammea americana: 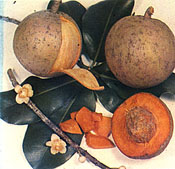 Botanically, it is identified as Mammea americana L., of the family Guttiferae, and therefore related to the mangosteen, q.v. Among alternative names in English are mammee, mammee apple, St. Domingo apricot and South American apricot. . . .The ripe flesh is appetizingly fragrant and, in the best varieties, pleasantly subacid, resembling the apricot or red raspberry in flavor.. . The mamey is native to the West Indies and northern South America. . It has been nurtured as a specimen in English greenhouses since 1735. It grows well in Bermuda and is quite commonly cultivated in the Bahama Islands and the Greater and Lesser Antilles. (Link.)

In other words, it’s the mangosteen’s long lost Latin American cousin! Mangosteen was previously noted by Abhi as the South Asian Queen of Fruits, and fellow guest-blogger ADS had previously directed my attention to the Fighting Mangosteens! At some point we wondered idly if the tough looking fruit was drinking a glass of its own brethren. I hope it’s not a glass of its Carribean cousins. I am rather charmed by a vision of this tough desi fruit affectionately greeting its relation at the airport, albeit with an Italian accent: Mammea Americana!

Ahem, back to your regularly scheduled seriousness–the issue of patents, profits, and drug manufacturing has long been entangled with the subcontinent. About a year ago I blogged about the Institute for OneWorldHealth, a non-profit working to develop a drug to treat Black Fever Leishmaniasis, which kills 200,000 every year in India, Nepal, and parts of Africa. Quite a controversy has raged over the patenting of the traditional use of neem as a fungicide, especially given WTO pressure on other nations to conform to U.S. Patent law. Indeed, controversy is still simmering over the pharmaceutical implications of patenting the human genome. (Hat tip, Rhinocrisy.) The concentration of drug profitability in the developed world contrasts painfully with the concentration of tropical diseases in the developing world, and some have proposed that an Open Source model be used in drug development. Check it out, O Brilliant Mutineers.

I’d like to reiterate that the shikimik acid is only a starting ingredient, so that chewing tons of haritaki is unlikely to to be a good substitute for Tamiflu in case of Avian flu infection. Also, Razib’s blogmate ScottM says that Avian flu isn’t that worrisome.

*Could the hive mind help me figure out if this Roche method is the same as this Michigan State patent on biocatalytic synthesis of shikimic acid, United States Patent 661 3552?