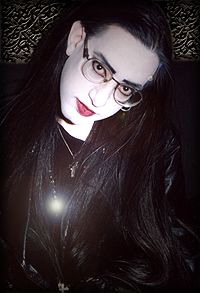 Shumit Basu designs custom corsets and other items for his label Underground Aristocracy, which has been “hand-crafting corsets for the discerning corset enthusiast since 1997 using a range of materials from fine silk to leather.”  Basu studied at the Art Institute of Chicago and the London College of Fashion, and has been designing for over ten years. Underground Aristocracy currently offers a large selection of corsets for sale, and also promises that more items including bridal wear, accessories, skirts, and cats (?) will soon be available online.

Basu’s work has been mentioned in Time Out New York:

His tattered sketchbook, on which he’s inscribed Le Saint Grimoire de la Mode (“Sacred Magic Book of Fashion”), reveals influences from the 1600s to the 1980s. His Justine model, based on a 17th-century nursing corset ($400), is radically updated in S&M-inspired black cowhide; its breast flaps unbuckle to reveal bare nipples. Another design, VerdÃ¤chtig (German for “suspicious”), owes more to the 19th century. It’s a waist cincher, worn under the bust, and is stunning in red raw silk with black side-laces ($200). 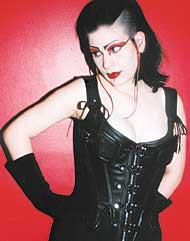 I think it’s nice that Basu is doing his part to encourage breastfeeding among new mothers.  An interview with Basu can be found in Morbid Outlook magazine.  In it, he discusses the significance of his label’s label:

MORBID OUTLOOK: Why “The Underground Aristocracy”? It’s an elegant but long name!
SHUMIT: I have been a bit concerned about the length of the name, it is something of a mouthful. The idea behind the name reflects an attitude I’ve sometimes perceived in the gothic scene that gothic people are somehow more special and deserving than other sorts of people. Kind of like “if only I was living in the 17th century…” So in a sense, the gothic scene represents a sort of modern day aristocracy, but as no one else might agree with this, it’s underground, hidden from sight. I have considered using my own name, but I think I’ll save that for some future project.

Eventually I would like to open my own store, but in the more immediate future I’m concerned with expanding the on-line catalogue, and finding retailers that will stock my work. I think some people may prefer the convenience of ready-to-wear corsets. I would also like to go beyond corsets into other areas of women’s and men’s wear. I think of my clothes as being gothic, but I wish to expand the concept of what constitutes gothic attire, and I would like it if my clothes appeal to a broader group outside the gothic and fetish scenes.

Maybe Basu will inspire Sepia Mutiny to add some nursing corsets to their own fashion line.