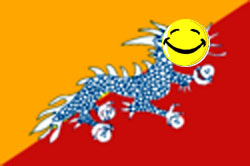 Many countries look at their Gross Domestic Product (GDP) as a measure of how strong their economy is and whether it’s expanding or contracting, but also to give an idea as to the standard of living in the country:

GDP is defined as the total value of final goods and services produced within a territory during a specified period (or, if not specified, annually, so that “the UK GDP” is the UK’s annual product). GDP differs from gross national product (GNP) in excluding inter-country income transfers, in effect attributing to a territory the product generated within it rather than the incomes received in it…

The most common approach to measuring and understanding GDP is the expenditure method:

Blah Bla Bla Blah Blah.  I’m not freakin’ Alan Greenspan and I’ve never taken an economics course in my life.  What else you got?  The New York Times reports on Bhutan’s economic indicator of choice.  It is a measure that in my opinion is ready for export.  The GNH, or Gross National Happiness:

What is happiness? In the United States and in many other industrialized countries, it is often equated with money.

Economists measure consumer confidence on the assumption that the resulting figure says something about progress and public welfare. The gross domestic product, or G.D.P., is routinely used as shorthand for the well-being of a nation.

But the small Himalayan kingdom of Bhutan has been trying out a different idea.

In 1972, concerned about the problems afflicting other developing countries that focused only on economic growth, Bhutan’s newly crowned leader, King Jigme Singye Wangchuck, decided to make his nation’s priority not its G.D.P. but its G.N.H., or gross national happiness.

Bhutan, the king said, needed to ensure that prosperity was shared across society and that it was balanced against preserving cultural traditions, protecting the environment and maintaining a responsive government. The king, now 49, has been instituting policies aimed at accomplishing these goals.

Their economic theory isn’t that far out is it?  I am not naive enough to think that they’ll get the prize later this week and am not ready to declare that I am moving to Bhutan, but why not consider the merits of this idea?  Every economic statistic thrown at you about a given country might tell you that the population as a whole is becoming wealthier.  That doesn’t mean that the lives of individuals are any better in terms of quality or happiness does it?

“We have to think of human well-being in broader terms,” said Lyonpo Jigmi Thinley, Bhutan’s home minister and ex-prime minister. “Material well-being is only one component. That doesn’t ensure that you’re at peace with your environment and in harmony with each other.”

It is a concept grounded in Buddhist doctrine, and even a decade ago it might have been dismissed by most economists and international policy experts as naÃ¯ve idealism.

The article informed me that an American wrote about a very similar idea way back in 1973 in a book titled, Small Is Beautiful: Economics as if People Mattered.  Such ideas in the long run may be destined to fail though.  Numerous studies have shown the following to be true about humans:

Even more striking, beyond a certain threshold of wealth people appear to redefine happiness, studies suggest, focusing on their relative position in society instead of their material status.

Nothing defines this shift better than a 1998 survey of 257 students, faculty and staff members at the Harvard School of Public Health.

About 50 percent of the participants, the researchers found, chose the first option, preferring to be half as prosperous but richer than their neighbors.

Read the rest of the article.  It contains many insights on the intersection of wealth and happiness.  Keep in mind though that even in a “happy” country,  not everyone is smiling.