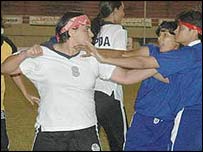 Pakistan’s women footballers, used to battling hardline Islamists opposed to their activity, ended up fighting themselves in a landmark final.

A mass brawl broke out after the award of a penalty in the first final of the National Women’s Football Championship in Islamabad’s Jinnah Stadium.

I wouldn’t want to get punched by one of those girls. Wait, if it was footie, why were they using their hands? That’s not allowed!

“The girls of both teams freely kicked and punched each other. The catfight forced the tournament organisers to enter the ground and put an end to the brawl,” it reported.

The federation dismissed the incident as a “football flare-up” and said there would be no inquiry but images of the scuffles were widely covered in the local press.

Of course it was widely covered in the local press. The mens, they loves them some girl on girl action. Not that they got to see it live:

The women players were fully covered to avoid offending Muslim sensibilities and no male spectators were allowed.

Wha-? No men? Huh. I guess they were all covered up so that they wouldn’t offend the Muslim sensibilities of females or hermaphrodites, then.

Hell, why term it “Muslim sensibilities”?

Un-Muslim and insensible me was watching a football game last week when I noticed that the cheerleaders were essentially hopping about in bikinis. They looked like idiots. If you’re the Dallas Cowboys Cheerleaders, that’s one thing…but the rest of you vomen of the NFL– rediscover the allure of a wee pleated skirt. Sheesh.