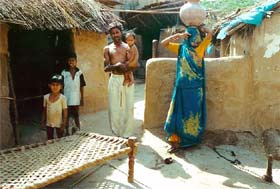 This story left me conflicted.  On the one hand I hate to see ignorant people (tourists in this case) taken advantage of.  On the other hand I feel like all those wanna-be hippies that slurp up exoticised “Indian” culture deserve what they get.  The Guardian reports:

India has always had an embarrassment of riches for the traveller: marble Moghul tombs, grand palaces, palm-fringed beaches and Himalayan treks. Now the country has a new tourist attraction on offer: the village.

To anyone who has spent time in India’s villages, paying to sun oneself while cattle loll and cowpats dry under the sky might seem a little far fetched. But for Renuka Chowdhury, India’s tourism minister, the villages can easily be repackaged as exotic destinations where foreign tourists can enjoy rural pursuits such as drawing well water and churning butter.

“We will encourage people to come and stay with Indians – the way Indians live – and learn from the masters … This will bring the world to the villages,” Ms Chowdhury told Reuters.

The more adventurous tourists can sample the army camps of Kashmir, a state that has been wracked by an insurgency since 1989 and where more than 80,000 people have died.

“Sample” army camps in Kashmir.  That’s rich (although not unprecedented). I bet they charge extra if you want to be introduced as a Dalit into your chosen village.  Don’t get me wrong, there ain’t nothing wrong with slumming it.  Just do it for the right reasons.

38 thoughts on “Yep. There is a sucka’ born every minute.”