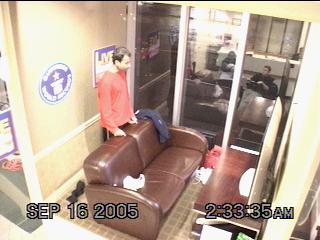 Lawd, what will these crayzee Sri Lankans do next?!

But let’s back up a sec. Who here knew “Live with Grouchy and Yappy” had a Guinness Record Breaker Week? Raise your hand, you uber-desi, you! Suddenly the Reeg’s yorkiepoo face looks an awful lot like that of my Tedious-Know-It-All-Uncle who wouldn’t shut up about the girl who balanced a teacup on her nose for days, or the boy who barked for a week. What the hell did any of that have to with Medical School anyway?

Amazingly, Suresh Joachim does have a method to his madness. From his website, a statement of purpose:

Â“I, Suresh Joachim, am deeply disturbed and stirred by the ongoing violence and its direct impact on children…all my endeavors will be designed to help suffering children all over the world.

To spread my message in World I am attempting new world records with the aim of spreading world peace and to create an awareness of suffering children. The UFFORSC (Universal Fund For Suffering Children) branch has been inaugurated in Australia, Canada for helping millions of suffering children in Asia and Africa.

My ultimate aim is to carry a peace torch commencing in 2006 from Jerusalem (Jesus Birth Place) to Australia…covering 6,000 km to raise one billion dollars for my purpose.

My homeboy ain’t foolin’, you know. He already holds some thirty Guinness world records, including: 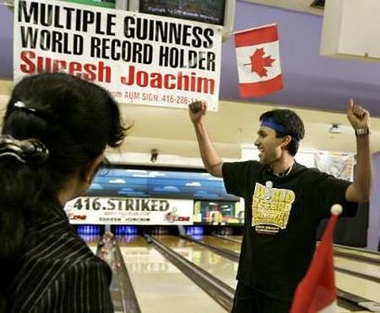 And that’s just for starters. Among my favorites (scroll down):

- Accompanied by 79 Bridesmaids on his wedding at the Christ the King Church, Mississauga Ontario, Canada on 6 September 2003

- Accompanied by 47 Groomsmen on his wedding at the Christ the King Church, Mississauga Ontario…

- Created the world’s longest bouquet, measuring 62.09 metres in length at the Christ the King Church…

His wife must have the patience of Job.

Sorry for the short notice, but if you want to cheer on this strangely noble quest, head over to the WABC studio at 67th St & Columbus (NYC) before or around 10 am. You just might celebrate with the goofy Canuck as he contemplates his future plans. (Thanks ANNA and Arzan!)

“I’m going to be a little tired of watching TV after this,” Joachim told The Associated Press by phone during a brief break.