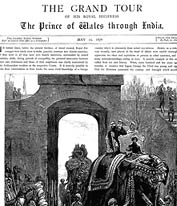 A few times we’ve posted a link (1,2,3,4) to some political cartoon in the newspaper that hasn’t been quite down with the brown (i.e. often times an illustration of someone South Asian is filled with obnoxious stereotyping).  Barficulture.com recently reported that a new website has compiled nearly a hundred years of newspaper articles and cartoons about the Punjabi community in the UK, which includes some amazing illustrations of life in the19th century:

Launched by the UK Punjab Heritage Association (UKPHA), Punjab Archive is an online collection highlighting the extensive body of material relating to the Punjab, as reported in illustrated and non-illustrated Victorian age newspapers.

The material graphically illustrates the shared heritage and contribution of Punjabis in world history, especially in relation to the building of the British Empire in the second half of the 19th century.

Nearly all of the newspapers are illustrated with woodblock engravings and photographs, and cover a range of events and characters, many significant, some curious, but nearly all little known. The archive was put together by an agency of young Asian designers in Birmingham, Macro Juice, who devised the site in a way that takes a high quality scan, breaks it up into sub images and then stitches them back together in a format that loads quickly but makes it difficult to steal the image, thus resolving copyright issues.

p>It’s really a trip just looking through some of the great illustrations (although the website is a bit slow).  If you can spare the time also read through a few newspaper clippings by zooming in.

“This is a site of historical documents and news stories from over 100 years ago. At a purely recreational level it allows users to quickly and effortlessly delve into their own personal heritage finding new stories that resonate with themselves and their personal history. At a more scholarly or professional level it provides a bank of material that can be used by journalists, writers and historians for writing assignment and projects.”

UKPHA hopes the website will become a regular citation in Indian & colonial history PhDs in the future.

2 thoughts on “A trove of illustrated history”