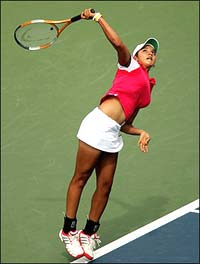 The 18-year-old from Hyderabad defeated Italy’s Elena Camerin 6-4, 1-6, 6-4 in a roller-coaster of a match and with France’s Marion Bartoli to follow, she will harbour genuine hopes of reaching the last 16 and a likely encounter with top seed Maria Sharapova.

But she will need to fully recover physically from what was a punishing second round tie if is she is to better her breakthrough third round performance at this year’s Australian Open where she eventually lost to Serena Williams. [Link]

p>Now ranked 42nd in the world, Mirza is the first Indian woman to win a match at the U.S. Open. She’s got lots of power, but in her last two matches committed plenty of worrisome unforced errors.

Injuries notwithstanding, Sania Mirza has opted to play in the women’s doubles, partnering Australia’s Bryanne Stewart, at the US Open… Sania has a strained abdominal muscle and is also troubled by bleeding toes…

In the mixed doubles, Leander Paes joins hands with Martina Navratilova, in what could be the 48-year-old legend’s last US Open. Paes and Martina [are] seeded seventh… Mahesh Bhupathi will pair up with Slovakian Daniela Hantuchova…

Paes and Bhupathi are playing with their regular partners Nenad Zemonjic of Serbia and Montenegro and Martin Damm of the Czech Republic respectively in the men’s doubles. [Link]

Mirza is a devout Muslim from a conservative Islamic family who tries to pray five times a day. Her aggressive game is not only breaking down stereotypes, but also putting tennis on the map in a part of the world where cricket is king. “Fifty years ago, people in India didn’t believe that a woman could play a professional sport,” says the affable Mirza…

If there is tension between being a pro athlete and coming from a conservative Muslim upbringing that calls for women to bare little skin and adopt low-profile lives, Mirza is not fazed. “Not everyone is perfect and just because I wear a miniskirt… doesn’t make me a bad Muslim…” [Link]

“She’s not an Indian as far as the mind goes,” says Times of India reporter Prajwal Hegde, who came to New York to cover Mirza’s every move for India’s largest daily paper. “She’s bold and brazen and that comes out in her game.” [Link]

25 thoughts on “Sania Mirza in U.S. Open third round (updated)”