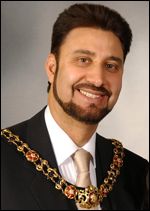 Pretty soon, the press will be full of stories concerning  the alienation of British Asian Muslims. While this is an important perspective, and may be an accurate depiction of a segment of British Muslim society, it is not the whole picture.

There are also success stories like that of Mohammed Afzal Khan, Manchester’s first Asian Lord Mayor. Khan was a high school dropout who worked  in the textile mills until he had a typically desi epiphany:

One night in the late 1970s, clocking off from work following another long night shift, he began the trudge out of the valley toward his home. At the top of the hill, he turned to survey the scene: the chimney jutting out of the mill, the red-tiled roofs on the terraced housing emblematic of working-class northern England.
“I thought, ‘Do I want to spend the rest of my life in this mill?’ ” Khan recounts. “The answer was no. That was the moment that changed everything. I realized that education is paramount.”   [CSM]

Khan went back to school to learn the basics, working his way through college while his wife (he got married at 19) trained as a dentist. After a series of jobs “from bus driver to youth worker,” he became a police constable. Although he had achieved a measure of security and status, this wasn’t enough for Khan.

He spent 2-1/2 years as a police constable, developing a keen interest in the law. When he was informed he would not be allowed unpaid leave to study, he took a risk and quit.
“My police superintendent said, ‘You’re making a big mistake, your future is here,’ ” he recalls. “I said ‘I’ll live with my mistake.’ And I have.”  [CSM]

Khan graduated from Manchester University, and became a partner in a Manchester Law firm. Even this wasn’t enough for Khan.

A father of three, he found time for community and interfaith work before the lure of local politics brought him a council seat in the Cheetam Hill section of the city five years ago.
City mayors in Britain, for the most part, are not directly elected. In Manchester, they are chosen by the council. Khan won the approval of his 95 fellow councilors. A stint as deputy mayor led to the top job. He was appointed on May 18. [CSM]

Khan’s job was hard enough even before the 7-7 bombings. Now, he’ll have to work even harder to bridge the rift opened by the terrorists’ cowardly actions and the racist response to them. But if anybody has the background for the job, it’s this former factory worker / bus driver / youth worker / constable / lawyer / interfaith advocate. For Britain’s sake, I hope he succeeds.