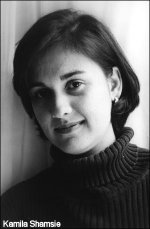 Soniah Kamal of Desilit Daily posts an essay by Muneeza Shamsie on Pakistani literature from the May 7 Dawn (no direct link). The article raises some questions for me about the nature of Pakistani literature, including the basic question of how to define it.

Shamsie has edited several anthologies of Pakistani literature, including one that is scheduled to come out this year (And the World Changed: Contemporary Stories by Pakistani Women; not yet listed). Muneeza Shamsie is also the mother of Kamila Shamsie (pictured right), who seems to be a bit of a prodigy, having published four novels by the age of 32.

I’m grateful to Muneeza Shamsie for offering a long list of Pakistani writers in English; some of them are names I was unfamiliar with. But there are also some things Shamsie does in her essay that I find to be puzzling. 1. Zulfikar Ghose — the first Pakistani novelist in English?

In 1967 the expatriate Zulfikar Ghose published the riveting The Murder of Aziz Khan. This was the first cohesive, modern English novel written by a writer of Pakistani origin. The plot about a poor Punjab farmer destroyed by a group of industrialists, though fiction, was so close to the bone, that the chattering classes were abuzz, speculating “who-was-who.” GhoseÂ’s remaining novels were set in South America, his wifeÂ’s country and few reached Pakistan. (link)

It’s interesting she grants Zulfikar Ghose this status, since his only association with Pakistani nationality is the fact that he was born in Sialkot, and is a Muslim. He’s never lived in Pakistan, though at one point in the early 1960s he almost moved there. According to Muneeza Shamsie’s own biography of him here (a fascinating read, by the way — this man has had an exciting life), Ghose’s family left Sialkot for Bombay in 1942, and Ghose went to England to study in 1959. He married a Brazilian woman in 1964, and has lived in various places in the western hemisphere (including South America) since then. Since 1969, Ghose has taught at the University of Texas. As far as I can tell he is still there, teaching away. (Funny how many cool people end up in Austin, isn’t it?)

To me it seems like Ghose is “Pakistani” by association, but defining writers that way could potentially open up some problems. For instance, if the criterion is birth in what would later be Pakistan, many other writers might qualify, including Khushwant Singh (who published his first novel, Train to Pakistan in 1956).

He didn’t write in English — and so remains off Shamsie’s list — but another problem case is Saadat Hasan Manto, a Kashmiri Muslim who was born in an area that remained in India (Ludhiana, Punjab) during Partition. He migrated to Pakistan in 1947, which would seem to make him a Pakistani, except that most Indians one talks to think of Manto as a great Indian writer. (A translation of Manto’s classic story, “Toba Tek Singh,” is available online.)

Fortunately, later in the same essay, Shamsie acknowledges the problem of defining a “Pakistani” writer, which is exactly the same as defining a Pakistani person when citizenship is not considered the main criterion. One thing Shamsie does not mention, however, is the question of people who may have been born in, say, East Pakistan, and then become redefined as Bangladeshis after 1971. (Though I can’t currently think of any writers specifically in this category; it may not be a big issue.)

2. “Where are all the Pakistani writers?”

More from the Shamsie piece:

Over the next few years, the number of Pakistani English language writers grew rapidly. Adam Zameenzad published four novels and won a first novel award, as did Hanif Kureishi, while Nadeem Aslam won two. Tariq Ali embarked on a Communist trilogy, and an Islam quintet; Bapsi Sidhwa received a prize in Germany, an award in the USA, and published her fourth novel The American Brat (1993). Zulfikar Ghose, who had written around 10 accomplished novels, brought out the intricate and complex The Triple Mirror of the Self about migration and a manÂ’s quest for identity, across four continents. Despite this, in Pakistan, everyone said, Â“Oh, there are so many Indians writing English, but why arenÂ’t there any Pakistanis?Â” (link)

Here she makes a very good point. The novelists on this list are all quite accomplished, and indeed, there seems to be a critical mass of serious Pakistani literature emerging, albeit based overwhelmingly in the diaspora. (This is true to a much greater extent than it is in India.)

Why then does the idea of “Indian Writers in English” roll off the tongue, while “Pakistani Writers in English” seems a much more tentative formulation? It may have to do, at least partly, with the divergent interests and experiences of the writers on Shamsie’s list. The style of writing and the thematic interests in the writing of four of the names mentioned in the above paragraph (Hanif Kureishi, Tariq Ali, Bapsi Sidhwa, Zulfikar Ghose) are so different, it’s hard to imagine that all four have their origins in the same country. While the British-Pakistani (‘Brit-Asian’) writers seem to have a certain critical mass, especially with the arrival of people like Nadeem Aslam, when read as exclusiely in terms of their place of origin, the major ‘Pakistani writers’ are pretty isolated from each other.

In short, the category ‘contemporary Pakistani writer in English’ holds together as a kind of geopolitical marker, but perhaps it doesn’t correspond to a real body of texts as well as it ought. (The key word is “perhaps.”)

3. A final oddity: repetition, with a difference

A final oddity: according to Google Cache, Muneeza Shamsie published a version of this article back in February. It is different, yet the same.

On Kashmir to Kabul

On Imad Rahman’s I Dream of Microwaves

On Sara Suleri’s Boys Will Be Boys

23 thoughts on “Pakistani Writers in English: A Question of Identity”