[Warning: Numerous links in this post are Not Safe for Work]

Friday night, after his outstanding comedic debut, I met up with Apul for a drink.

“I had a story left that I hadn’t got around to blogging on SM,” he whispered to me in a conspiratorial tone as his eyes darted anxiously around the bar. What had Apul come to learn that had shaken his normally unflappable demeanor? In the din of the Irish pub, which would have been smoke-filled if not for California’s strict anti-smoking measures, only three words penetrated to the heart of my blogger mind: “Escort,” “Indian,” and “blogger.” Could such a thing be? Is conservative brown society ready for a woman amongst their population who works simultaneously in the world’s two oldest professions? More importantly could she entice one even as jaded and hope-deprived as I have come to be with her blogging? Could time spent at her website, reading her blog, get me to halt the life of vice and heavy drinking that has ruled my nights since I was denied my one chance at happiness, when I was torn away from my true love and she consented to marry another? Let’s allow the story of Kama (and my own) to unfold… 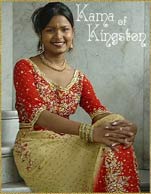 My Grandmother was a Devadasi, but in earlier generations, my Devadasi ancestors broke with tradition and having left their place of origin, had been able to marry, enabling them to live more normal lives. I decided to become a practicing Devadasi so I could gain sexual and financial autonomy, and live independently of the South Asian patriarchy.

While studying in London I had become sexually active and I decided in that my dealing with men I could commercialize many sexual exchanges while still enjoying genuine intimacy and friendship. These relationships were often very temporary and transient, but they were also transparent, honest and allowed me to maintain my own independent identity. So having been born a Devadasi I finally came to place where I could reclaim and live a Devadasi identity.

Kama is a college student in London who works as a “Devadasi”, which others would refer to as a call-girl or a prostitute. The outstanding magazine Ego has previously interviewed Kama. 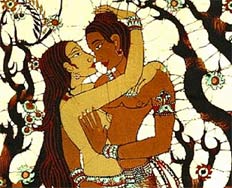 EGO: Historically, how do Devadasis learn to please a man? Is there a special training Devadasis must undergo? In other words, how do you learn your gift?

KAMA: I do not believe that it so much about learning sexual techniques or physical bouncing around, as offering sexual intimacy with genuine affection. Many sex working women must feign affection because they have no particular feelings for a man with whom they might only meet once for a couple of hours. However, the Devadasi is married to the Gods, and our love and affection for the Male Deities is genuine. As each man is in someway an incarnation of the Male Deity, we can truly express affection for any man. So while I am a very capable lover, my gift was not learnt, but is the consequence of my genuine relationship with the Gods.

I think that Human Rights Watch for one would emphatically disagree with Kama’s views: 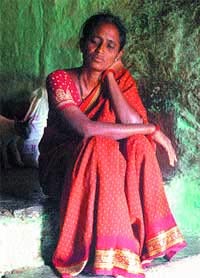 The practice of devadasi, in which a girl, usually before reaching the age of puberty, is ceremoniously dedicated or married to a deity or to a temple, continues in several southern states including Andhra Pradesh and Karnataka. Literally meaning Â“female servant of god,Â” devadasis usually belong to the Dalit community. Once dedicated, the girl is unable to marry, forced to become a prostitute for upper-caste community members, and eventually auctioned into an urban brothel. The age-old practice continues to legitimize the sexual violence and discrimination that have come to characterize the intersection between caste and gender.

The patrons of the devadasis are generally from the higher castes because those from the devadasis own castes are too poor to afford to [pay] for the rituals. In many cases a patron kept many girls and the number of girls used to be a yard stick of the status of that man. This system of patronage has given way to [a system of] commercial prostitution in the populated big cities.

I wondered however what Kama’s answer would have been if EGO’s question hadn’t ignored her other profession. What if they had asked this logical follow-up?

EGO (if Abhi worked for Ego): Historically, how do bloggers learn to please their audience? Is there a special training bloggers must undergo? In other words, how do you learn your gift?

I sat down at my computer with a glass of cheap whiskey cradled in my left hand and my back slumped only slightly, as Gollum’s must have before his rapid descent. I had come to her blog to forget the longing and growing bitterness inside of me. I had hoped that she would be able to coax “the male deity” out of me as she claimed she could. This was a very recent entry:

A more humane solution would be a proper widow’s pension, and the possibility of preferential entry into the civil service or police once the child has graduated from school.

My heart sank and I poured another glass of the dark whiskey. She was trying at least, but her blogging was not making me forget my great sadness. I had covered this same story more cleverly on this very blog. Perhaps it is I that should be the devadasi and help others forget. I continued reading…

I was so pleased to see that the Minister had intervened to overturn this heavy and unnecessary fine, almost three weeks wages for the father of the child!

It really is not fair for a wealthy temple to fine a poor family for such an accident.

I was now up to my fourth (or maybe my fifth) glass of whiskey. In addition to the pain in my heart there was now one coming from my gut somewhere. It was obvious that Kama cared for me, her reader, and wanted me to be knowledgeable about world events, but I found Manish’s entry (and Manish himself) far better able to elicit forth my “male deity.”

I don’t care for world events any longer. I just wanted someone whose blog would speak to me since my true love can’t. I wanted someone to calm my hopes and fears. To allow me release…

Too late do I realize that this pain in my gut is the grip of cirrhosis tightening around my liver. As I lay inebriated next to my laptop, finishing this entry, I swear I can hear a woman’s voice call my name just louder than the dull thump of these last few keystrokes…

39 thoughts on “The Blogging Devadasi”