Last week, 65 year old Dr. Gulam Moonda, of Hermitage, PA (an Indian-American physician) was executed on the side of the Ohio turnpike (a well traveled highway) while his wife and mother in-law sat helplessly in the car. This has been a pretty well-publicized story due to the brazen nature of the killing. The Toledo Blade reported: 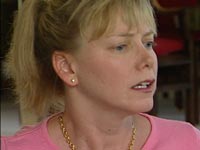 Gulam Moonda, 65, of Hermitage, Pa., died from a single gunshot wound in the head during a roadside robbery. Lt. Rick Zwayer, a spokesman for the Ohio Highway Patrol, said the incident occurred at 6:38 p.m. Friday after Dr. Moonda and two other people in his 2000 Jaguar stopped along westbound I-80 to exchange drivers.

The lieutenant said the suspect allegedly stopped behind Dr. Moonda and demanded money. He complied, but the suspect shot him and fled the scene. Authorities are searching for a dark-colored van but have not released a further description of the vehicle or of the suspect.

According to a Good Samaritan who was first upon the scene, his wife was described as frantic and waving her hands wildly to flag down a passing car for help. WKCY.com reported:

The Good Samaritan doesnÂ’t want to be identified until the killer is caught. But he wonÂ’t be silenced about what he saw. He will never forget, a wife trying to save her husband.

In the frantic moments after the shooting, Dr. Gulam MoondaÂ’s wife and his mother-in-law desperately tried to flag down other drivers for help.

Just today however a “person of interest” (Oh, how I hate that term) was named. KDKA.com reports:

Ten days after someone gunned down the Mercer County doctor along the Ohio Turnpike, investigators have identified Damian Bradford, 23, of Monaca, as a “person of interest” in the case. According to the affidavit of probable cause, a confidential informant told police that Bradford was in a drug rehabilitation program with Donna Moonda, who plead no contest to stealing fentanyl from a hospital where she worked.

The information claims the two had a serious relationship, and that Mrs. Moonda rented an apartment for Bradford in Monaca.

Police searched that apartment on Friday, during which they say they found controlled substances and drug paraphernalia.

If this was a hit then it might explain why Donna Moonda wanted to pull to the side of the road and switch drivers. That’s purely speculation on my part of course. I feel justified in speculating though because that’s how “persons of interest” are convicted in the justice system?