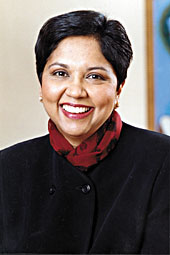 After beginning her speech with words of praise and recognition for the graduates and their families, Ms. Indra Nooyi began to make the political statement du jour. After talking of her childhood back in India, Ms. Nooyi began to compare the world and its five major continents (excl. Antarctica and Australia) to the human hand. First was Africa – the pinky finger – small and somewhat insignificant but when hurt, the entire hand hurt with it. Next was Asia – the thumb – strong and powerful, yearning to become a bigger player on the world stage. Third was Europe – the index finger – pointing the way. Fourth was South America – the ring finger – the finger which symbolizes love and sensualness. Finally, the US (not Canada mind you) – yes, you guessed it – the middle finger…

EVERY YEAR, somebody makes a fool of him/herself while giving a commencement speech. How about going to Riyadh and telling them how they’re seen? That would be real courage . .

UPDATE – Followup post from Powerline with more info including other folks who heard the speech, and Pepsi PR flack’s refusal to release the text of speech.