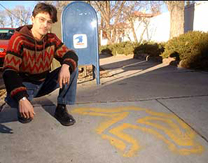 My favorite radio show, This American Life, had a riveting and humorous, true story this past weekend. It involved a twenty-something Afghani American who only wanted to impress his girlfriend by spray-painting some “frogmen” on the sidewalk outside of her apartment. By the end of it all he was in jail and on several terrorist watch-lists. The story even personally involves Donald Rumsfeld. It sounds dire but it all turns out well in the end. The many twists and turns in the story make it worth every second of its 40 minute recording time.