Reza Aslan has been making rounds on the talk show circuit recently to hype his book “No God, but God.”

In No god but God, Aslan challenges the Â“clash of civilizationsÂ” mentality that has distorted our view of Islam and explains this critical faith in all its complexity, beauty, and compassion.

Irshad Manji (born to Indian and Egyptian parents) on the other hand takes a different approach. USA Today reports: 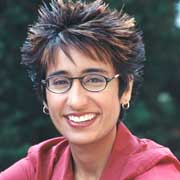 Irshad Manji has plenty of enemies among her fellow Muslims. Her critique of Islam is frank and fierce. She defends the invasion of Iraq. She sympathizes with Israel. She’s a lesbian and doesn’t try to hide it.

“Then there is the hair,” she adds, referring to the spiky highlights that sharpen her live-wire manner.

What has brought this Uganda-born Asian-Canadian to prominence is her book, “The Trouble With Islam Today,” just out in paperback in the United States where she has been touring and talking.

As you can imagine, a practicing Muslim with such unique views might be a product of an unusual background.

The events that shaped Manji’s views date to her childhood.

She was born to parents of Indian and Egyptian descent who were among thousands of Asians expelled from Uganda by dictator Idi Amin in 1972, who saw them as outsiders imported by the country’s British colonialists.

Her family landed in the Vancouver suburb of Richmond, where her mother first sold Avon products and then worked as a cook for an airline. Her father was a carpenter, then a real estate agent. The parents divorced 19 years ago and she has had no contact with her father since. In her book she describes him as physically abusive.

Manji was 4 when her father put her in a free baby-sitting service at Rose of Sharon Baptist Church. She said her stream of questions about Jesus were met with encouraging smiles by the woman who supervised the Bible study.

“She made me believe my questions were worth asking,” Manji writes. “Maybe that’s what motivated me, at age 8, to win the Most Promising Christian of the Year award.”

Manji often finds herself in the unenviable position of defending herself both against liberals and “mainstream Islam.”

She recently showed off her two-fisted style on HBO’s “Real Time With Bill Maher,” going up against liberal co-panelists to defend the invasion of Iraq as a human rights issue Â— the only way Saddam Hussein’s brutal regime could be toppled. To the argument that Iraq was never a threat to the United States she replied that this was the kind of reasoning that ignores the suffering of people living under Middle East dictatorships. “In the last 100 years alone,” she says, “more Muslims have been tortured and murdered at the hands of other Muslims than at the hands of any former imperial power.”

I am sure you are wondering the same thing as me, right? When is the Fatwa coming?

She says that when she met Rushdie in Toronto, he told her: “Whenever a writer puts out a thought, it can be disagreed with Â— vigorously, vehemently, even violently. But it cannot be un-thought. And that is the great, permanent gift that the writer gives to the world.“

A professor of religion at San Diego State University says the following about Manji:

“She threatens my male authority and says things about Islam that I wish were not true. She has a big mouth, and fact upon fact to corroborate her analysis. … She is a lesbian, and my madrassa training has instilled, almost into my DNA, that Allah hates gays and lesbians. I really should hate this woman.

“But then I look into my heart and engage my mind, and I come to a discomfiting conclusion: Irshad is telling the truth.”

81 thoughts on “Irshad Manji has plenty of enemies”