I sense a conspiracy. My senses are often way off though so I will let you guys be the judge. First, Renu Kansal sends us the following tip from Variety.com (subscription required):

Leaders of the world’s top media and entertainment groups are increasingly beating a path to the subcontinent as they recognize its huge potential as an emerging market with a population of 1.3 billion. Rupert Murdoch, in particular, is a frequent visitor. 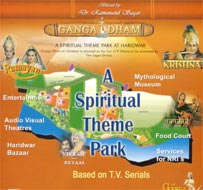 Did you get that so far? Michael Eisner of DISNEY was spotted in India on business. TODAY the BBC has this story (thanks to my brother for the tip), announcing the world’s FIRST Hindu theme-park (that we’d heard rumblings of before). Coincidence I ask you??

Its backers describe it as the “world’s biggest ever mythological theme park”. Hindu gods such as Ram, Hanuman and Krishna will be the central attractions for a ‘Disneyland on the Ganges’ in India.

The aim of the 25 acre park, called Gangadham, is to recreate great moments in Hindu mythology through hi-tech rides, an animated mythological museum, a “temple city”, food courts and a sound and light show.

The park is to be on the banks of the Ganges, in the north Indian pilgrimage town of Haridwar.

I bet you they will just take apart and old Dumbo ride from Disneyland, modify it to make it look like Ganesh, and then charge a fortune. Also I remember the California case not so long ago where Tigger was charged with, but acquitted of fondling a young girl. Can you IMAGINE if such scandal were to hit a Hindu theme park? Perish the thought. Of course Disney in reality has nothing to do with this but it’s fun to imagine what would happen if they did.

16 thoughts on “Gangadham: A Hindu theme-park”