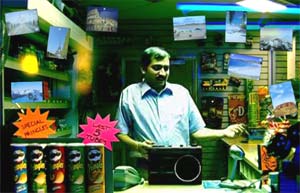 You knew it was coming: Subservient Sanjeev of the fictional Nevashut, a mini-mart at a British petrol pump (thanks, Turbanhead). Sanjeev, who’s a promo for Pringles potato crisps, is a meld of Burger King’s Subservient Chicken promo, Apu from The Simpsons and video cut scenes from those lame choose-your-own-adventure arcade games of the ’80s.

As is usual in this genre, Procter & Gamble UK strives to be inoffensive by being inconsequential. It’s not totally in-your-face, though it lays the mini-mart stereotypes down thick.

Give Sanjeev some love. Try typing: dance, run, play me a song, moustache, money, and stupid, the clips are pretty funny. I wonder whether anyone’s extracted all the possible video clips from the Web site yet.

Kittyminx thinks it’s racist viral marketing, but the humor is so corporate-colorless (try ‘punch’), I have a hard time getting my high dudgeon on:

If they did this with a black person or a Jew, a lot of people would be pissed and rightly so… The only reason why it hasn’t yet is that I’m guessing that Asians and South Asians in particular, are about the only ethnic group left that pop culture thinks its ok to make fun of. And this ad campaign probably comes from the UK… [w]here they are less concerned about “political correctness”… it also seems that the British are a lot more openly and blatantly anti-immigrant, saying things that in America are usually only said by Pat Buchanan and other wingnuts.

Update: Thanks to reader epoch, you can now see every single keyword that triggers a video clip.