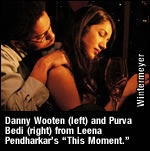 A Windows Media version of Leena Pendharkar’s short film, “This Moment,” is downloadable over at Cinequest Online (via Hollywood Masala). You can watch the film in its entirety by registering with the site, which is free. The 15-minute film stars Purva Bedi (“American Desi”) and Danny Wooten. From the film’s official web site:

Can love really conqueror all? Uma Balachandran, a 20-something Indian American woman is at a unique crossroads: faced with a romantic, sunrise proposal from her African American boyfriend John Ray, her instinct is to say yes. But she’s haunted by her father’s wishes for her to marry the perfect Indian man. What’s worse, Uma’s old flame of 4 years, the all-American Troy Black, wants Uma back so badly, he’s planning to storm in on Uma and John and break up their sunrise tryst. But an unlikely stranger alters his destiny. Does love really conquer anything? Maybe. Maybe not. Set in front of the rising sun behind the beautiful backdrop of San Francisco, A Moment is about choices. (15 minutes, Super 16 mm)

Unfortunately, Cinequest disdains cross-platfrom compatibility, so the film only plays on Windows Media Player 9 for Windows 98/2000/XP. I won’t be able to watch it on my trusty Mac, so you’ll have to guide me with your reviews.

28 thoughts on ““This Moment” viewable online”