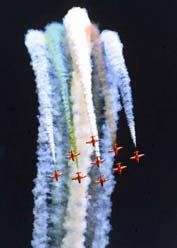 The Surya Kiran (Sunrays) precision flying team looks fantastic, but even to these non-military eyes they don’t cluster as tightly as the Blue Angels. They fly Kiran Mark II trainers instead of the more capable F/A-18 Hornets; these stubby trainers handle forgivingly but are slower than front-line fighters. So they use the patented Indian solution of throwing manpower at the problem by using 50% more pilots on the team 🙂 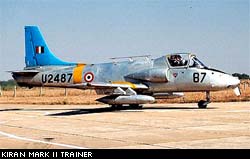 The Surya Kiran issues are related, of course, to India’s difficulty in buying Western military tech after years of sucking up to Russia to ward off China. Most Indian fighter hardware is comprised of MiG-21s from the ’60s with a smattering of Sukhois, Mirages and Jaguars. India’s just now getting around to buying F-16s, which are soon to be obsolete in the Western world. The issues are also related to India’s limited pilot training; the hardware and training issues combined have given the Indian Air Force an alarming accident rate.

Encouragingly, India’s finally developing its own Tejas (Radiance) fighter, a supersonic, semi-stealthy, fly-by-wire delta wing, to replace its MiGs. Tejas shares its name with an optical networking startup in India, one of the few India-headquartered companies funded by an American VC. However, the Tejas is long-delayed; they should bring in the on-time-under-budget Delhi subway leader to kick some butt. I also wonder whether it wouldn’t be better to skip manned fighters entirely and leapfrog to unmanned UAVs, which can handle much higher G-forces. There’s lots of precedent — India leapfrogged wired lines for mobile phones and old subway tech for new. And remote pilotry would be the ultimate in outsourcing. 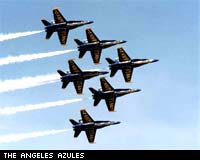 Then there’s the naming issue, a.k.a. Queer Eye for the Military Guy. It’s not like the U.S. military has perfect taste in names (the Blue Angels were called Satan’s Kittens during the Korean War — meow!). And this military did have the flair to choose the Trishul (Trident), Agni (Fire) and Nag (Cobra). But ‘the Sunrays’ sound like they cut a record around the same time as the Bee Gees. It dooms them to the same fate as my brother’s old soccer team, the E.T.’s: ridicule by soccer moms.

But then I’m a stickler for aviation branding. Here are some more Surya Kiran photos and details on the Tejas. Previous posts on the Indian Air Force: 1, 2.