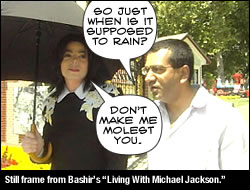 The judge in the Michael Jackson child molestation trial ordered journalist Martin Bashir to testify as a government witness against the pop singer, despite his attempts to avoid participation.

From the Sunday Mail:

The TV reporter — whose documentary “Living With Michael Jackson” triggered the investigation against the star — has been called as a “necessary witness” in the trial, which starts (Monday).

Bashir, 42, had tried to get out of giving evidence by citing a law that protects reporters from having to testify about things they see while working on a story.

Bashir became the first desi network correspondent for one of the big three broadcast outlets when he joined ABC’s “20/20” in December. His debut story for the news magazine was an interview with BALCO head Victor Conte, who admitted to supplying illegal supplements to some of the sports world’s most successful athletes.

This year’s trial of the century kicked off today in southern California, and the mainstream press is in the process of wetting itself, because there really isn’t anything else of importance going on in the world.

Sunday Mail: Jacko on trial: Bashir in the box
The Smoking Gun: Bashir a government witness in Jacko trial?

2 thoughts on “Bashir ordered to testify in Jacko circus”