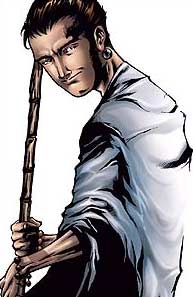 By now it is quite well known (see previous post)that Marvel Comics and Gotham Entertainment launched a version of Spiderman for the Indian market. Despite the fact that Peter Parker is now Pavitr Prabhakar the story is very similar. The Weekly Standard quotes Gotham CEO Sharad Devarajan:

It is one thing to translate existing U.S. comics, but this project is truly what we call a “transcreation,” where we actually reinvent the origin of a property like Spider-Man so that he is an Indian boy growing up in Mumbai [formerly Bombay] and dealing with local problems and challenges. I have always believed that the superhero relates to a “universal psyche” already firmly established in India through centuries of mythological stories depicting gods and heroes with supernatural abilities . . .

Though we will remain true to the underlining mythos of Spider-Man, which is epitomized in the phrase “With Great Power Comes Great Responsibility,” the character will be reinvented so his powers, problems and costume are more integrated with Indian culture. Unlike the U.S. origin, which is deeply rooted in science, the Indian version is more rooted in magic and mythology.

The Weekly Standard goes on to dissect the differences between the two protagonists:

THE FIRST ISSUE of Spider-Man: India demonstrates that Devarajan was dead serious when he spoke of preserving the Spider-mantra that “with great power comes great responsibility.” In 1962, Spider-Man learned this enduring lesson when a security guard asked him to stop an armed robber in the midst of making his getaway. At that time, Peter Parker was an embittered teenager with no sense of obligation to the greater good. He refused to apprehend the robber.

Later that same night, Peter returns home to find out that his beloved Uncle Ben has been murdered. Enraged, Peter hunts down the murderer, only to discover that it is the tough he let go. This tragic coincidence provokes his epiphany.

In Spider-Man: India, young Pavitr Prabhakar learns his lesson in an almost identical manner. While swinging across Mumbai, Pavitr hears the cries of a young woman surrounded by a gang of thugs. He does nothing and swings away. Moments later, Pavitr’s beloved Uncle Bhim hears the cries of the same young woman and decides to confront her assailants. They warn Uncle Bhim that they will hurt him if he does not walk away. Bhim stays. He is murdered. Later that night, Pavitr learns of his uncle’s death, hunts down the murderers, and experiences an epiphany of his own.

Although its innovations seem trivial, India’s reworking of the Spider-myth brilliantly enhances the painful irony of the American original. Whereas Ben’s murder is a matter of pure coincidence, Bhim dies because he had the courage to confront precisely the same evil that his nephew wouldn’t. In both instances, the punishment for selfishness is the death of a loved one. Yet in India, that loved one is also a martyr whose death becomes the embodiment of the ethos to which Spider-Man must aspire.

THE COUNTERPOINT to India’s subtle reworking of the death of Uncle Ben is its ambitious recasting of Spider-Man’s powers as the worldly incarnation of a purposeful, mystical force rather than the accidental outgrowth of a scientific experiment. In a recent interview, Devarajan observed that the diametrically opposed forces of science and magic represent the fundamental contrast between Eastern and Western culture.

This of course brings me back to a belief that I touched on in this post, in which I (and Vinod in the comments) suggested that those in the U.S. foreign policy community who want a better way to win hearts and minds in the long run, might look at alternative forms of “propaganda.” It is not known yet how popular the Indian Spiderman will be, but it does seem at face like a great way to forward American values wrapped in the beliefs and subtle differences of a specific culture.

At first, the suggestion that Pavitr has a destiny that he must fulfill may strike some readers as un-American. In the land of opportunity, we reject out of hand the notion that individuals must resign themselves to their fate. Instead, we believe that there are no limits to what can be achieved by a combination of hard work and ingenuity.

Yet is the concept of destiny really so foreign? Was it not under the banner of Manifest Destiny that the young United States claimed for itself the Great Plains and the northern reaches of Mexico? Was it not Ronald Reagan who constantly reminded the citizens of the United States that they had a “rendezvous with destiny”? To what else did George W. Bush refer to in his second inaugural address when he stated that “History has an ebb and flow of justice, but history also has a visible direction, set by liberty and the author of liberty”?

The most important difference Spider-fans will notice between the Indian and American notions of destiny is the Indian belief that tyranny and evil are primal forces no less powerful than freedom and good. Yet there is also a considerable measure of doubt embedded in the American vision of progress. Although one scientific accident gave Spider-Man his powers, other scientific accidents were responsible for the creation of his arch-nemeses, Dr. Octopus and the Green Goblin. In the final analysis, that which makes Pavitr Prabhakar authentically Indian does not make him in any way un-American.

Today the Republic of India is the most populous democracy on the face of the Earth. Someday, it may rival the United States in terms of wealth and power. Conventional thinking suggests that the emergence of a second superpower would threaten the security of the United States of America. Yet if India’s first superhero recognizes that with great power there also comes great responsibility, perhaps we should look forward to the emergence of an Indian superpower.

Shashwati points us to another reviewer who has a different take:

Now don’t get me sideways, I too believe that comics are instruments of change, injections of hope into the curious brain, and they can be used for propaganda. The very first comic we produced as a studio was to examine and protest the violence that happened in Gujarat a couple of years ago. We are also making a graphic novel to conduct propaganda for child relief in India.

However, Devarajan is wrong, because many American superheroes are wrong. With great power comes blindness and corruption of one’s moral fabric, not ‘responsibility’.

The typical American superhero is designed to defeat evil at all costs, using a set of special powers that he has acquired by some means. Good versus evil, always ending in victory for good. Black and white, zero or one, with no room for gray. With great power comes the notion Ã¢Â€Â” “If you are not with us, you are against us.”

The rest of this article by Bombay based writer Rohit Gupta is a VERY thought provoking read.

5 thoughts on “The Anatomy of a Spider”