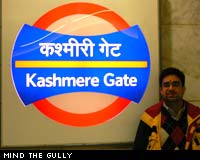 I rode the Delhi metro the week it opened its first underground route:

Extra-wide cars, fully automated driverless trains, all-electronic fare gates with magnetic farecards and cool magnetic tokens, overhead electric wires that are safer than a third rail, floor-through layout so you can walk from one end to the other without opening doors… this subway system has the finest in Indian, err, South Korean tech. The subway feels and sounds like the D.C. metro. It’s faster and wider than Boston’s, newer and more luxurious than New York’s.

Check out the photos.

6 thoughts on “Riding the Delhi metro”