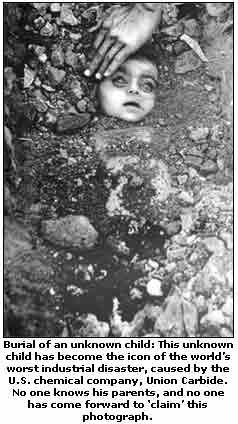 Since we are just days away from the anniversary of history’s worst industrial disaster, I thought it was important to highlight a couple of relevant articles on the subject starting with this excellent piece in The Tribune of India.

For many who survived the dark night of December 2-3, 1984, in Bhopal, dawn is yet to break. The leak of 40 tonnes of lethal methyl isocyanate (MIC) gas from the Union Carbide CorporationÂ’s (UCC) pesticide factory Â— the worst industrial disaster in history Â— killed or disabled several lakhs. By the third day of the disaster, around 8,000 had died. Today the number of those who died stands at 20,000. Lakhs who survived were debilitated for life. Of the 5,20,000 who were exposed to the poisonous gases, 1,20,000 remain chronically ill. Nor is that all; till today children in the city are born infirm and deformed.

Successive governments, Union Carbide Corporation and its new owner Dow Chemical shrugged off responsibility for the compensation and rehabilitation of victims. After years of legal wrangling for compensation, more than five-and-a-half lakh survivors of the tragedy are facing another threat. The hazardous waste, still lying abandoned at the site, is continuously seeping into the ground water.

With the scientific evidence of contamination in ground water increasing and spreading with every passing day, the wait for a sequel to the 1984 disaster has started.

20,000 dead and still no justice. It reveals a lot about the way the World works when you see what kind of justice is provided after a terrorist attack by comparison. Is there any new momentum gaining in an effort to bring help and closure for the continuing victims?

It seems the government [Indian], which has been criticised for its lax regulation of the UCC and reluctance to pursue legal claims, is finally ready to hold Dow Chemical, the multibillion chemical company which took over the UCC, liable for the ground contamination.

Vinuta Gopalan, a Greenpeace India campaigner associated with the Bhopal campaign, terms this a good sign, even though it has come quite late in the day. “But that is how governments work. There is a lack of political will to enforce corporate responsibility and Dow Chemical refuses to fulfil its medical and social responsibility. It is not a question of 1000 houses but of 25,000 persons who still do not have access to piped water. These days tankers supply water to some areas, but during summers and monsoons matters become worse.”

There was likewise a move in the U.S. Congress last year led by representatives Dennis Kucinich (D-OH) and Frank Pallone (D-NJ) to supply some pressure.

Eighteen members of Congress sent a letter to Dow Chemical today [June 22, 2003], condemning the corporation for “refusing to address” liabilities associated with the 1984 chemical gas disaster in Bhopal, India, the worst industrial tragedy in human history. “The disaster in Bhopal continues,” the letter states, “and is likely to worsen if Dow Chemical does not step forward to fulfill its responsibilities,” the letter said.

…The letter, circulated by Dennis Kucinich (D-OH), a current Democratic Presidential contender, and Frank Pallone (D-NJ), follows a meeting on Capitol Hill with Rashida Bi and Champa Devi Shukla, two women survivors and leading members of the International Campaign for Justice in Bhopal (ICJB). At the meeting, organized in May by Kucinich and the ICJB, the survivors testified to the ongoing humanitarian and environmental crisis in Bhopal. Following the meeting, Kucinich and Pallone drafted the Congressional sign-on letter, and at least one member, Jim McDermott (D-WA), expressed an interest in visiting Bhopal on the 19th anniversary of the disaster in December 2003.

“The Bhopal disaster is widely regarded as the worst peacetime environmental catastrophe in world history,” said the New Jersey congressman during a speech on the House floor. “This important resolution expresses our commitment to work with the Indian government and others to ensure that Union Carbide provides environmental and medical rehabilitation in Bhopal and is held responsible for its actions.

“India is the largest democratic country in the world and enjoys a close and mutual friendship with the United States based on common values and common interests,” Pallone continued. “As a result, our countries should come together to recognize the gravity of the Bhopal disaster and the ongoing environmental problems in Bhopal caused by Union CarbideÂ’s policies and practices.”

Pallone’s resolution, H. Con. Res. 503, expresses Congress’ commitment to working with the government of India, Dow Chemical Corporation, and the victims of the Bhopal disaster to ensure that Union Carbide provides complete medical, social, and economic rehabilitation to the victims and their families. The legislation also calls on Union Carbide to completely restore the polluted plant site to a habitable condition, fully remediate the drinking water supply, and to appear before the Bhopal District Court for prosecution on the criminal charges pending against it.

There should be several more articles on this in the next few days to keep an eye out for, but hopefully this post will serve as a primer.

27 thoughts on “hell on earth”