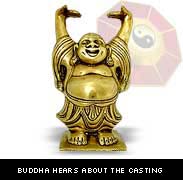 Aishwarya Rai may play Buddha’s wife in a biopic coinciding with the 2,550th birthday of the Gautama. The film’s backers have signed up Shekhar Kapoor and should find it easy to recruit Hollywood stars who dabble in Buddhism.

The chance to play opposite Aish would turn me into a monk any day, but there’s a catch: