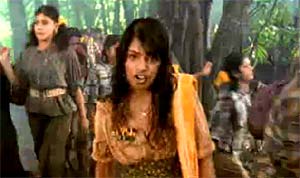 Guerrillas in her midst: Mathangi ‘Maya’ Arulpragasam, a.k.a. M.I.A., is a 26-year-old British Asian DJ who raps in the garage/grime genre (via Tablatronic and our own Sajit). For song material, she mines her family’s flight from the Sri Lankan civil war.

The new arrivals were not exactly welcomed with open arms by London’s Sri Lankan community… “They are really obsessed with impressing the British. They want to be doctors and engineers and go to Cambridge, buy leather couches to match their encyclopedias, have a sitar in the corner and whip their saris out once a year for a wedding. They’d look at us and go, ‘We don’t want them hanging round with our kids, they’re into rap, they think they’re black.’… I’ll go to LA and be black: it’s better than being in Britain and being brown.’

Check out the video for ‘Sunshowers,’ a bouncy track which makes frequent and incongruous reference to guns, bombs and the guerrillas of Colombo.

Update: Nirali magazine has a great profile of Arulpragasam:

She never knew her father, one of the founding members of Sri Lanka’s Liberation Tigers of Tamil Eelam, a militant guerrilla group formed in 1976 with the goal of gaining political independence for Sri Lanka’s minority Tamil population. “We saw him once a year, for 10 minutes at a time. My mum said, ‘That’s your uncle–your dad is dead.’ It was to protect us,” she explains… “We lived in hiding for so long. We were just moving from village to village and from house to house. Nobody wanted to put us up; we were untouchable. Everybody knew about us in Sri Lanka, and nobody wanted to deal with us because we brought so much heat. The army would follow [us wherever we’d go]. We were living in big-time poverty, stealing mangoes off someone else’s tree,” she remembers.

Update: M.I.A. just spun in New York (photos) and landed on the cover of Fader magazine. Here’s the layout.