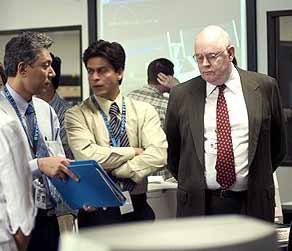 Yes. I am VERY bitter. Instead of coming to a real NASA Engineer such as myself, they chose SRK for the part in their new movie Swades. Some things are just inexplicable. From The Times of India:

Can you imagine Shahrukh Khan doing a Kalpana Chawla, donning the space suit and taking off? If your upper factory’s done a pole vault trying to imagine the Dilli ka munda as a scientist, don’t bother.

Come December, and Ashutosh Gowariker will present the Badshah as a NASA engineer, who retraces his steps to Bharat land in the quest of fulfilling his dreams.

Will the film be any good? I am definetly not qualified to be a critic of Hindi films but there will at least be some authenticity:

It comes as little wonder that Gowariker decided to settle for SRK in Swades- We the people , which incidentally, is the first Indian film to be actually shot inside the NASA research centre at the Launch Pad 39A of the Kennedy Space Centre of NASA in Florida.

Some critics think it even has Oscar potential:

However this techno-savvy movie is not a sci-fi attempt by Gowariker but a sensible thought-provoking film about an intelligent Indian who leaves his country for a better life abroad but later rediscovers his roots and turns back. The film itself has the intensity to be among the best of Bollywood classics and may even catapult the already world-renowned Shahrukh Khan among the league of the best of the best actors across the globe. Do we see a couple of Oscars beckoning?

Come to think of it, a bunch of sexy hindi film dancer girls in form-fitting space suits is very similar to a dream I once had. Maybe it won’t be so bad. I am still bitter they did not come to me first however. What did Shahrukh Khan think of his NASA experience?

Actually, King Khan had gone there expecting to see some Austin powers or at least James Bondian type of futuristic lab. But he is totally disappointed. “It’s like any of our computer labs or institutes. Desks, tables, test tubes, and computers, hundreds of them,” says Shah Rukh Khan, who expected something greater. Maybe the real futuristic stuff is in the deeper underground, where an Indian film unit cannot reach, however.

Futuristic stuff? If I told you, I’d have to kill you.