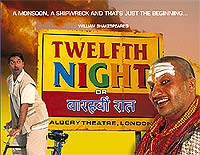 A London production of Shakespeare’s Twelfth Night reimagines the play by setting it in modern India. Stephen Beresford’s production opened Aug. 26 in London for a ten-week run, featuring a mostly desi cast for the classic gender-bending, mistaken identity tale.

The production relies on notable actors including Kulvinder Ghir (Goodness Gracious Me) as Feste, Raza Jaffrey (fresh from London’s Bombay Dreams) as the duke, and Neha Dubey (the cutie in Monsoon Wedding). Shireen Martineau plays the androgynous female lead, Viola. Jatinder Verma from Tara Arts is advising; he previously put together an all-desi version of Moliere’s Tartuffe at the National Theatre in London.

Beresford said India was exactly what he was looking for:

…[M]odern people in a modern setting but living in a culture thatÂ’s rooted in its past, mysterious, religious and magical; a place where attitudes to sex, love and death are frank and realistic, but where women might veil themselves in front of strangers; a world of shrines and marriage settlements, where ancient music and ritual are a part of daily life… Once India had suggested itself, the solutions followed. Feste becomes a Baul singer, a Bengali tradition of nomadic minstrels and soothsayers… [A]n Elizabethan setting carries its own problems. If you want the freshness and sophistication of the play to come across, you set yourself an uphill struggle by kitting out the actors with ruffs…

The production derives more than a little inspiration from an intriguing TV version of the same play with Parminder Nagra (ER, Bend It Like Beckham) as an intense Viola, Ronny Jhutti (Wild West) as Sebastian, Zubin Varla as a comic Feste, and Chiwetel Ejiofor (Dirty Pretty Things) as the duke. It also follows an Indian version of A Midsummer Night’s Dream which played in Florida.

The production turns the shipwreck which launches the story into an Indian monsoon which is brought to life on stage every night, rivaling the pneumaticism of the fountain in Bombay Dreams. Scenery aside, the key issue is, does the cultural translation work? The director is a believer:

“If Shakespeare were to be dropped into modern day Mumbai and then London, he would definitely feel more at home in Mumbai. Moving the play nearly 4000 miles and setting it in India brings it closer to the spirit in which it was first written.” What Beresford is referring to, for example, is the vast gap between the poverty on the streets and the wealth of large homes, the women in veils, the segregation of the sexes. Beresford also points out that: “honour codes, veils, devotion and rules on marriage are all elements in the play that draw on Indian culture”.

Everything we discovered in India seemed to make sense of the play. Its vibrancy, its passion, its cruelty, the irreverent humour that informs every interaction, the public nature of peopleÂ’s emotional lives. Shakespeare might have recognised a great deal Â— not least the unsentimental way people approach whatÂ’s thrown at them. Ingenuity is all, in India and in Illyria. (Times)

The Guardian called the concept terrific, though it wasn’t thrilled with the acting:

Transposing the play to modern India is a terrific idea – the concept suits the drama perfectly, particularly in the social delineation of the characters, often through the way they speak the verse. It works particularly well with Paul Bhattacharjee’s excellent Malvolio, a man socially stranded by his servant status and desperate to achieve the respect that he believes his standing deserves. There is tragedy in this poor man’s dreams.

In the final scene it is the music, lighting and setting that do most of the work, not the actors. It is a pity, because Shereen Martineau’s Viola is young and unaffected and she passes beautifully as a boy, even if she fails to bring emotional depth to the role. There is an intriguing Feste, too, from Kulvinder Ghir, whose wandering Bengali minstrel really does walk that tightrope between comic and melancholic.

In the end, Beresford didn’t feel culturally constrained by the bawdy bard:

I canÂ’t help thinking that Shakespeare would have approved. He did subtitle the play with a provocative, Â“Or what you willÂ”. Sounds like an open invitation to me. (Times)

One thought on “The brown bard: ‘Twelfth Night’ in India”