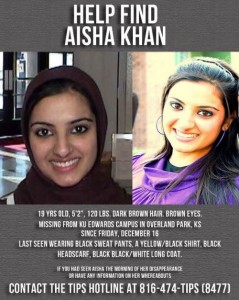 Faiza said she and a cousin went to the campus and found Aisha’s phone, book bag and iPod on a picnic table, but her sister was gone. [cjonline]

Aisha went missing on Friday morning around 11am. It has been three days since she’s gone missing. Every minute counts right now. Her family has put out a reward for $10,000 for any information on her disappearance.

Aisha’s disappearance is only one in a long line of crimes in the South Asian American community that have happened in the past few weeks.

Most of the crimes mentioned above are not currently considered hate crimes by local police and local advocates are working hard to make the crimes recognized as such. It’s difficult to imagine, especially seeing the crimes listed side by side, how the incidents were not fueled by islamophobic and xenophobic hate.

One thing I’m sure of, the rise of crimes like those above are directly correlated to the rise in anti-Muslim and anti-immigrant bigotry that we see in popular media. Unfortunately, I’m afraid that Aisha Khan’s disappearance is one that was fueled by islamophobia as well. My prayers are with her family and I’m wishing for her safe return.