Update: I put this post up before a very long road trip. When I checked the comments on my smartphone 10 hours later at a truck stop things had clearly gone in an unproductive direction. So I closed comments. In the future I understand that it will not do for me to put up a post when I won’t be able to monitor initial comments, as excising inappropriate ones after the fact fragments the conversation too much. Live and learn.

For the record, I have no issues with being impolitic on the substance of matters. But thread-jacking as occurred below when there’s so much low hanging fruit to discuss is not acceptable. Speaking of which, in response to S. R. Datta’s mooting of the issue of hepatitis as the reason for sex ratio distortion in China, that hypothesis seems to have been rejected, including by the scholar who originally forwarded it. Obviously that may not be true generally, though let us note that sex ratio imbalances are well known from the historical record, and they often vary as a function of time and class (e.g., medieval European nobility seemed to exhibit son preference, while peasants did not, at least as adduced from the ratio of the sex of buried infants). I think the Trivers-Willard hypothesis may explain some of these trends across human history.

Several readers have pointed to the recent, unfortunately predictable, story coming out of the Indian census, Selective Abortions Blamed For Girl Shortage In India:

Chandramouli says this is a continuation of a trend that was first seen clearly in the 2000 census — but the new figures show the problem is spreading.

“It has to be said that what was predominantly a North Indian phenomena of a few states has now spread across the country, and we see a uniform decline all over the country, so that is what is more distressing,” he says.

First, in the short term economic development can lead to the spread of practices through emulation of dominant elites. But, in the long term one can see a reversal of the preference for boys to girls. In Japan the shift occurred 20 years ago. In Korea the change is happening now. One hopes that the same switch will occur with China and India, though it seems unlikely that these nations will become as wealthy on a per capita basis as Japan or Korea in the near future, so it would have to be driven by non-economic factors as well (the drop in fertility in some nations preceded economic growth, to the surprise of demographers, so it can happen).

But it must be remembered that regional differences persist, as is evident in this map: 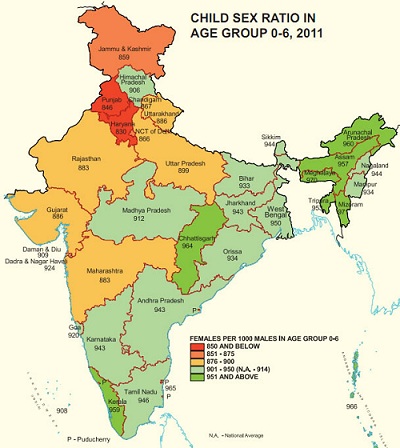 On a personal note, my extended family in Bangladesh has been shifting to a norm of one or two children. My mother has also observed that in general my cousins are now expressing a preference for the first child to be a girl in case they only have one child (some of them are starting their families rather late in life).

This can’t of course explain what’s going on in Punjab, which has a relatively low fertility (though Haryana’s is not so low). But one aspect of the Indian dynamic which I wonder about is the noted pattern of bringing women from poorer areas to rebalance the adult sex ratio. This may be serving to block the eventual cultural equilibration of sex preferences which is necessary for a functioning society.

You occasionally read about the persistence of sex selective abortions in Asian Diasporic communities. I am curious though as to the prevalence of the practice, as well as inter-cultural differences. Does the intra-Indian variance persist in North America and Europe? I would bet it does, but I don’t know. Certainly a lot of economic background issues are collapsed in a relatively affluent consumer society with generous old age pensions. Finally, Diasporic communities oftentimes preserve the more archaic elements of the culture of origin due to an artificial stasis (e.g., foot-binding was last practiced among the Chinese of Malaysian Borneo in the late 1970s). It would not surprise me if, for example, the Punjabi communities of Vancouver retain the norms of “Old Punjab” longer than Indian Punjab itself does.

31 thoughts on “The girl dearth”