In the past I have been accused by unruly commenters on this blog of being obsessed with President Barack Obama. No. That is false. Admiration is not obsession. I am however, endlessly fascinated (perhaps obsessed) by what is in the man’s pockets. In June of 2008 I cited this photograph in Time Magazine. I openly (but with tongue-firmly-in-cheek) wondered, “is Obama a secret Hindu?” In his pocket he carried a Hanuman good luck charm.

This morning I was on the WhiteHouse Flickr feed. I went there because I wanted to savor some of the images of a hard won health care reform victory. This was a “big f*cking deal.” There was a picture of Obama demonstrating an okey-doke. Another one that captured the exact moment history was made. But for me, none of them compared to this one, which had the following caption:

President Barack Obama holds a lucky charm given to him during the campaign, while on the phone with a Member of Congress in the Oval Office, March 21, 2010. (Official White House Photo by Pete Souza) [Link] 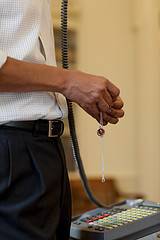 p>So what is that lucky charm you ask? I blew it way up to find out for myself: 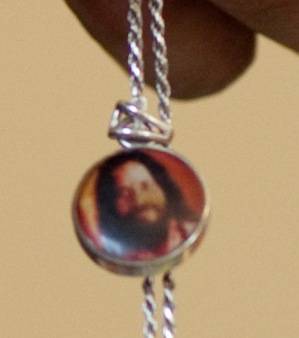 p>First, I don’t belive that is an icon of Jesus Christ. The face is atypically wide and the beard too wild. I also very much doubt it is a Geico caveman (as one of my friends offered). That, to me, looks like a yogi or Hindu spiritual leader of some sort. I can kind of make out saffron robes, a garland around the neck, and perhaps, just perhaps, a bindi closer to the right brow. Am I just smokin’ something or do you guys see it too?

p>We know that Obama doesn’t go to church very often (after the whole Reverend Wright fiasco). And this would be consistent with an observation made a few weeks ago by the Boston Globe:

… since President Obama took office a year ago, his faith has largely receded from public view. He has attended church in the capital only four times, and worshiped half a dozen times at a secluded Camp David chapel. He prays privately, reads a “daily devotional” that aides send to his BlackBerry, and talks to pastors by phone, but seldom frames policies in spiritual terms.

The greater privacy reflects not a slackening of devotion, but a desire to shield his spirituality from the maw of politics and strike an inclusive tone at a time of competing national priorities and continuing partisan division, according to people close to the White House on faith issues. [Link]

p>Can anyone accurately identify who that is on the charm for me? Surely there is a sleuth among you up to this challenge?

p>Later in the day Manish from Ultrabrown sent me a link to an interview President Obama gave to Indonesian journalist Putra Nababan last week. You will recall that Obama was slated to go there this week but had to delay the trip due to the healthcare bill. Listen to the very first question and answer:

Here is a summary of the first question:

During an interview with Indonesian journalist Putra Nababan of RCTI last week, Barack Obama commented on several rumors about the four years he spent in Jakarta as a child. Here’s a list of facts vs. myths according to the US president.

Fact “”I love the Mahabharata and Ramayana stories,” said Obama. “I used to love wayang and I am still inspired by the stories and [the character] Hanoman.” [Link]

All joking aside I know that Obama is a Christian. However, the President of the United States himself seems to be proving this Newsweek article from last year correct. Whatever their professed faith, Americans are slowly turning “Hindu” in practice. Even President Obama.