For those of you who have been there, you know that the entire portion of Houston outside the 610 loop, and between the 6 and 9 hand of the clock, is Asian. Chinese, Vietnamese, Indian, Pakistani. Asian. Hillcroft street is where all the South Asian businesses are concentrated, much like Chicago has Devon St. 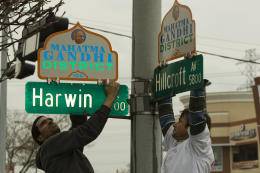 The owner of Karat 22 Jewelers on Hillcroft Avenue and other members of the South Asian community have waited seven years for these temple-shaped signs to go up in southwest Houston.

“It’s a great feeling,” Patel said proudly as he stood in the drizzling rain and watched Zane Frazar and Ron Mitchell install some of the 31 signs that will decorate street signs along Hillcroft Avenue, Harwin Drive, Fondren Road and Westpark Drive.

Leaders of the India Culture Center and Indian merchants have long wanted to rename Hillcroft Avenue Mahatma Gandhi Avenue, but municipal rules require 75 percent of commercial property owners on a street to sign a petition in support of changing the name before the City Council can consider it.

More than 76,000 people of Indian descent live in the Greater Houston area. [Link]

Two weeks ago I was in Mexico City. A waiter realized my companions and I weren’t Mexican and he said, “Indios como Gandhi, no?”

“Si, como Gandhi,” I thought, silently defeated. Don’t get me wrong. I admire Gandhi greatly. He’s my om boy. But how many Indians have lived on Earth since the dawn of man? And yet the most expedient way to describe us is that we are “como Gandhi.”

Mexico City has a bookstore chain also named after a famous Indian. Any guesses? 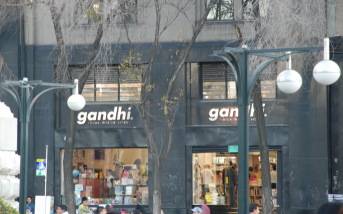 And on the way to Chapultapec we passed…a Gandhi statue.

So returning to the topic at hand, the Gandhi District in Houston. Although too late, I have a few alternative suggestions for Mayor Annise Parker. All of these will help diversify “thought association” when it comes to Indians. People have to associate us with something other than just Mr. Gandhi.

Merchants also had their own ideas for a district name.

Shri Krishna Center, in honor of the Hindu deity, is a more spiritual name, said Dilip Mulani, who owns Silk India, a shop stuffed with Indian purses, saris and fabrics.

“Gandhi was a very special person,” said Mulani, who added there should be a Gandhi statue in the area.

Some considered naming it after Pakistan’s founder, Mohammed Ali Jinnah, said Shah Moghul, the Pakistani owner of Bismillah restaurant, with its roti rolls, beef samosas and other foods piled in its heated display case. He said the name signifies it’s an Indian area but he will still refer to the area as Hillcroft so he doesn’t have to pull out a map to explain to people its location. [Link]

The reporter in the clip above couldn’t even pronouce his name correctly.

I guess I shouldn’t complain about this. There is an MLK Blvd in every U.S. City. Maybe one day there will be a Gandhi Blvd too.

But people, we need to seriously get together and find a second hero (preferably pan-South Asian so he has wider appeal)! This is just too much pressure to put on one man’s shoulders.