p>While the amount in question ($6.7B) is relatively small in currency circles (India holds $285B in reserves & China has dollar reserves >$2T), it is a highly symbolic move that their faith in the dollar and/or their need to tie their fate to it may have shifted a few notches of late. What could it mean?

Well, according to the canary in the coal mine argument, the rationale for shorting the dollar is relatively straightforward — fiat currencies are ultimately backed up by faith that the issuing government will be able to extract the stated value from its taxpayers over time. For the past 60-odd years, the US dollar has been backed by a stable government and an unmatched per capita GDP and as a result, other countries would often rather prefer to hold dollar reserves than any other currency. For all of Uncle Sam’s foibles over the last 60 yrs, you could be reasonably sure that he’d be there in essentially the same shape / form & able to pay up when your 30 yr t-bill came due.

Lately, however, the US deficit picture in particular is a potential signal that the relationship between government and taxpayer is likely to change – 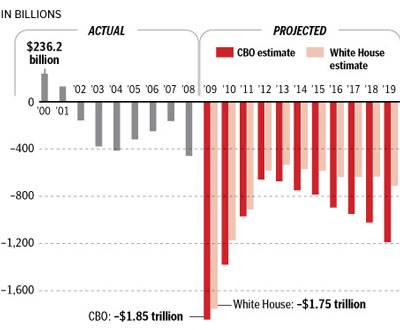 p>The problem, as Milton Friedman famously noted, is that deficits like this are ultimately resolved by 1 of 3 things -

Far from reducing spending, the Obama administration is emphatically pushing the curve upward (the deficit chart above for ex., most notably does NOT include any of the proposed health plans). To be fair, even the picture for pre-Obama unfunded liabilities isn’t very pretty (one guestimate for this figure is $76T – for comparison, our current annual GDP is $14T). He’s just arguably making an already bad spending prognosis much worse.

Increased taxes are not only politically difficult but the magnitude of the increases necessary to meet current obligations – much less the new ones – are tough to imagine. The perennial political hope is that a 1980s-esque scenario emerges where an economic growth inflection point drives increased tax revenue without necessarily increasing tax rates (or even, in Reagan’s case, more revenue with lower tax rates).

In lieu of either of these scenarios the remaining option, short of default, is currency inflation – basically start the printing presses, grow the money supply, and inflate your way out of debt & other assorted economic liabilities. It’s a dangerous but politically expedient option and not something that sovereign 3rd party countries enjoy being on the other side of. Depending on your proclivities, charts like this demonstrate that option 3 is precisely what Uncle Sam has started doing via the ever-expanding Fed balance sheet – 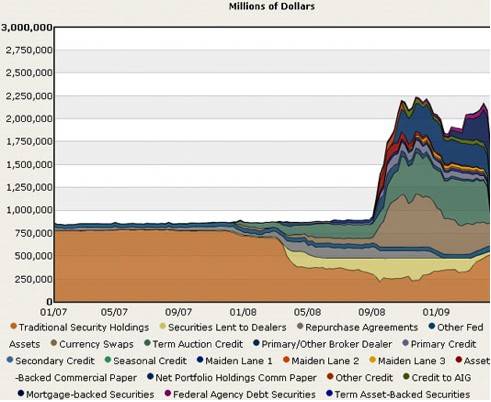 And so, to avoid waking up to a world where the billions of dollars they have in the bank are suddenly worth less, the Indian central bank has potentially decided to place more of its faith in good old fashioned gold. Will other countries follow suit? Tough to say – there are a variety of issues not the least of which is the potential that gold is experiencing it’s own bubble and the RBI may have bought at the proverbial top of the market. Perhaps the move isn’t a total commitment to an alternative reserve strategy but rather a signal to the US to clean up our fiscal ship?

The worst case scenario, of course, is that India continues to divest away from Dollars and that the move is copied by other countries – particularly China. Should that happen, the effects on the US would be pretty severe — $$’s held by other countries in the form of reserves are effectively low interest loans they’ve extended to us. Without it, servicing our debt would rapidly become our biggest fiscal outlay and any new programs eyed by Congress would become even bigger pipe dreams.

Still, actually replacing the dollar as a long term reserve is far easier said than done – for starters, there simply isn’t enough gold out there to truly replace a substantial % of reserves with metal (total annual gold production world wide is ~$90B / yr). So, if you really wanted to drop your $$’s, you’d have to find a different currency to replace it with. And then, the equation gets tough – do you really want to bet that the Govt of China, for ex., will be around in more or less the same shape & ready to pay up when a 30 yr Chinese note comes due? The Euro sounds interesting but its track record is pretty short and the several constituent countries have had a decidedly mixed record managing their currencies. Even worse, many of those countries have fiscal houses that are in far worse long term shape than the US – particularly due to ailing demographics and massive government bloat.

A decision by the Reserve Bank of India to buy 200 tonnes of gold from the IMF for 6.7 billion dollars does not reflect a preference for the metal over the dollar, the finance minister said Tuesday.

..The purchase “doesn’t mean we don’t prefer the dollar any more or like gold any better,” Finance Minister Pranab Mukherjee told reporters in New Delhi.

Some analysts expect central banks around the world to diversify their holdings and purchase more gold as a shield against a weakening dollar.

On the other hand, maybe all of this shouldn’t be interpreted as a reaction to the US as much as a shift in preferences within India. Perhaps the Indian government is just indulging in the well known desi fetish for Gold? Finance Minister Mukherjee notes one particularly emotional trigger that may be at play –

The government today said the RBI’s move to buy 200 tonnes of gold from multilateral lending agency IMF provided a healing touch to the nation’s pride that was dented about two decades back when the country sold its gold for a few hundred million dollars.

“It has much more significance because for many of you it is not the remote past,… how the sentiments of the country felt outraged when we had to pledge gold to Bank of England just for borrowing few hundred million dollars to maintain our essential import requirement,”

48 thoughts on “RBI Votes Against the Dollar?”