p>Update: The show in Houston is this Friday at the House of Blues. Admission is FREE before 11p.m.***

My friend Raj emailed me this morning with the ridiculous news that he is bringing BBC Radio’s DJ Kayper (*swoon*) here to the House of Blues in Houston next weekend (I missed her when she was in Austin for SXSW). After I got up off the floor from fainting I decided to post about it on SM. 25 year old Kayper, whose real name is Kaajal Bakrania, is impossible not to gawk at. She’s got skills.

Hailed as one of the finest DJ’s pioneering new music today, British born DJ Kayper is a seminal force on the urban, mainstream and desi music scenes. Having been approached to host a mainstream radio show for the BBC’s Asian Network in 2006, the “DJ Kayper” show has now gone on to become one of the stations biggest exports with global listenership. The show has attracted no less than the biggest and best urban and pop music guests namely Common, Questlove, Lupe Fiasco, Nelly Furtado, Xzibit, Kelly Rowland, Omarion, Wyclef, Will.I.Am and The Game in addition to UK artists such as Estelle, Sway, Kano and Jay Sean. [Link]

p>Her MySpace page has a bunch of other tracks you can sample and you can also see other video clips of her in action at YouTube. 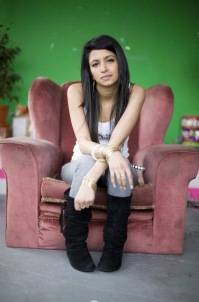 You have to give props to a DJ that respects her elders.

27 thoughts on “Two turntables and a microphone (updated)”