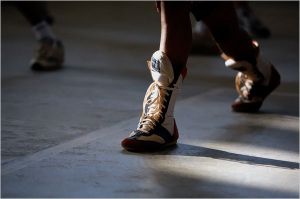 If the recent Wall Street Journal and New York Times articles about Indian women in boxing intrigued you then you’ll probably want to keep an eye out for the documentary With This Ring by Ameesha Joshi and Anna Sarkissian, currently in post-production. Joshi became interested in Indian women boxers when she came across a photo of one in a Montreal exhibit and learned the “Indian team was one of the best in the world.”

The filmmakers have been following female boxers in India for a few years and were there when Indian women claimed victory at the 2006 World Women’s Boxing Championship in Delhi, winning medals in eight out of 13 categories. Joshi writes, “Mary Kom in particular caught our attention, she was and still is the most successful amateur boxer ever, yet no one in India or elsewhere even knew she existed. We were inspired by their incredible achievements despite all their struggles and wanted to share their stories with the world.”

In addition to the YouTube clip above, you can get a taste for those stories at the filmmakers’ production blog, which offers glimpses of their travel and work in India and China as well as brief introductions to individual boxers.

Sarita Devi won a gold medal in 2006 and at 27 she is one of the oldest boxers on the country’s team. She works as a police officer â€” you may have read about how boxing provides upward mobility for some athletes because the Indian government rewards winning athletes with government jobs, usually with the police or railway.

Chhoto Loura, three-time national champion, works for the railway in Haryana and their visit to her office reveals little work and a short work day, probably to allow time for training. “When she retires from boxing in a few years, it is expected that she will continue working like a regular employee.” Another boxer the filmmakers meet is Preeti Beniwal, who is pursuing a master’s degree in English literature.

They also spent time with India’s most acclaimed boxer, Mangte Chungneijang Merykom, better known as Mary Kom, from rural Manipur. She has won four gold medals in the International Boxing Association’s World Women’s Championships and hopes to win gold in the 2012 Olympic games in London, now that the IOC has decided to introduce women’s boxing to the summer games. (According to the Journal, an Olympic gold gets a boxer $100,000 from the Ministry of Youth Affairs and Sports.) She is also an inspiration for girl boxers like the endearing Simmi Parveen, who was interviewed in the Journal’s video report.

Girls like Simmi Parveen, 12, dream of being the next Mary Kom. “This is an addiction for me. I will achieve something,” says Ms. Parveen, the youngest girl at the Khidderpore club. “When I’m somebody I wouldn’t have to go and look for a partner. Suitors will come themselves to talk to my brother and father for my hand. That’s why I want to stand on my own feet and do something.” (WSJ)