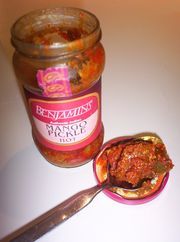 Aharay! What a waste of perfectly good achar…

The X-ray equipment used by TSA airport security in Columbus could not detect what was inside a sealed canister in a bag being inspected around 7 p.m. Tuesday. [wlwt]

A brown woman? A suspicious package? Airport security to the rescue!

The container was labeled “baby food,” but authorities say security personnel became suspicious when the woman who owned the suitcase claimed the canister held pickles. [kansascity]

p> There’s only one thing to do.

The fire department bomb squad removed the item from the airport and detonated it, discovering the mangoes.

No one was hurt. Flights and other airport operations were not interrupted.[wlwt]

There are two things I love to this story. First, I wonder where this woman was going that she absolutely had to pack mango achar in her luggage. Where ever it was, she just absolutely could not leave home without the essential mango pickle to take with her. Secondly, I find it hilarious that they detonated the canister of achar. I imagine flying tangy orange sauce exploding all over the members of the bomb squad and pieces of mango getting stuck in their hair. Couldn’t they have just uncapped the jar and tasted it instead?

27 thoughts on “Mango Pickle Down River”