I’m currently California dreaming, so I didn’t have time to write an anniversary post for Sunday (I always forget anniversaries, so this is true to life). 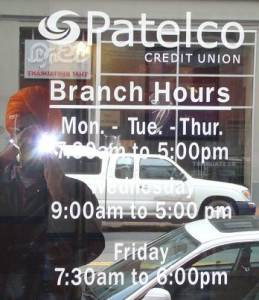 However, that doesn’t mean that I’ve forgotten you, dear readers. No, quite the contrary. Even though it has been two whole years we’ve been together, everything I see still reminds me of you. For example, on Saturday I was on my way to Adolph Gasser’s in San Francisco when I encountered my very first Patelco credit union. 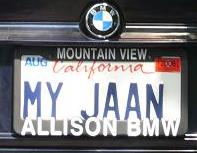 How could I help but stop and take a snap? When I saw it I could think of nothing more than how much I wanted to share it with you, to know what you thought of it, to bask in the way you smile at me when we encounter something new.

The next day, I was out for a stroll in downtown Palo Alto and saw a BMW 325ci with the vanity plates you had always threatened to get for my Subaru. It was as if you were right there with me, laughing at our little secret joke, teasing me. I almost started to lean down to say something when I realized that you weren’t there. But rest assured that not a moment has passed when I didn’t think of you and how very lucky I am. I don’t deserve you all, I really don’t.