Before there was Live Aid or Live 8, there was the original, the Godfather of all arena-rock fundraising concerts: 1971′s a Concert for Bangladesh:

The Concert for Bangladesh was the first benefit concert of its kind in that it brought together an extraordinary assemblage of major artists. The two shows, a Grammy award-winning triple album boxset, and the feature film, generated millions of dollars for a charitable cause and as importantly raised global awareness of a hitherto unpublicized humanitarian disaster. It is therefore acknowledged as the inspiration and forerunner of the major global fundraising events of recent years. To quote the UN Secretary General Kofi Annan “George and his friends were pioneers”. [Link] 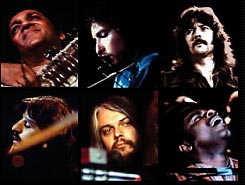 The Concert For Bangladesh was the event title for two concerts held on the afternoon and evening of August 1, 1971, playing to a total of 40,000 people at Madison Square Garden in New York.

As East Pakistan struggled to become the separate state of Bangladesh, tremendous political and military turmoil led to a massive refugee problem. This problem was compounded by torrential rains causing devastating floods and threatening a humanitarian disaster.

Shankar also asked Harrison’s advice regarding a small fund-raising concert in the United States. Instead, Harrison took over and persuaded his friends to join him at a large concert at Madison Square Garden. The event was organised within five weeks.

A well-reviewed re-release of the concert on CD and DVD drops in record stores Monday.

Ravi Shankar describes the personal importance he places on this concert:

Again and again I am asked which concerts stand out in my memory, and it is very difficult to remember all the prominent ones as my career spans over seventy-five years of performances; but the Concert for Bangladesh was very significant to me as the conception of the idea came from me and the people needing aid were very close to my heart; some of them, of course, being distantly related to me. Ali Akbar Khan and Alla Rakha joined me on stage for the first half and George Harrison played the second half, joined by other eminent musicians including Bob Dylan and Eric Clapton. George closed the concert with “Bangla Desh,” the special song he wrote for the occasion.

In addition to featuring an amazing array of talent, by most accounts some of the best performances in the careers of the artists involved were witnessed during the concert.  Here are three video clips:

23 thoughts on “A Concert for Bangladesh: Re-released”