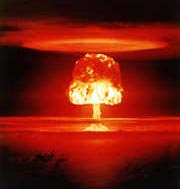 And from this chasm, with ceaseless turmoil seething,
As if this earth in fast thick pants were breathing,
A mighty fountain momently was forced:
Amid whose swift half-intermitted burst
Huge fragments vaulted like rebounding hail,
Or chaffy grain beneath the thresher’s flail…
And ‘mid this tumult Kubla heard from far
Ancestral voices prophesying war! …

I would build that dome in air…
And all should cry, Beware! Beware! …
And close your eyes with holy dread,
For he on honey-dew hath fed,
And drunk the milk of Paradise.

The Atlantic’s November issue has an excellent article on Abdul Quadeer Khan, the fat man behind Pakistan’s Little Boy. It’s the first in a two-part series about how Khan stole nuclear plans and procurement lists from a nuke lab in the Netherlands and turned funding from Pakistan, Libya and Saudi Arabia into a nuclear arsenal.

‘If your forces cross our borders… we are going to annihilate your cities.’

– Zia to Rajiv The full text isn’t online, so here are some key bits:

Khan had become something of a demigod in Pakistan, with a public reputation second only to that of the nation’s founder, Muhammad Ali Jinnah, and he had developed an ego to match. He was the head of a government facility named after him–the Khan Research Laboratories, or KRL–which had mastered the difficult process of producing highly enriched uranium, the fissionable material necessary for Pakistan’s weapons, and was also involved in the design of the warheads and the missiles to deliver them… A. Q. Khan was seen to have assured the nation’s survival, and indeed he probably has–up until the moment, someday in a conceivable future, when a nuclear exchange actually occurs. [Link]

It’s remarkable, the short-sightedness of European countries which cut off their noses to spite their faces. And they may suffer a loose-nuke attack as a thank you.

There’s no question a nation right next to a nuclear-armed enemy will figure out how to build the bomb, it’s only a matter of time. And I don’t even think nuclear self-defense is wrong in the abstract. I can’t fault Pakistan for that, even if it is against the interests of its neighbors and the world’s hyperpower, because it’s vital to its security. But what puts the entire world at risk is a leadership which has proven itself subject to military coup, loose nuclear controls and selling nukes and nuclear tech to the world’s flakiest and most dangerous regimes — North Korea, Libya, Iran. That mercenary attitude is irresponsible and scary. That makes non-prolif an important mission.

The Bulletin of the Atomic Scientists now uses India-Pakistan as one of its benchmark for its infamous Doomsday Clock. It now sits at seven minutes to midnight. Damn you, Peter Sellers.

In the same issue:

“He said, ‘We’re not the only court in the world. See what they have to say.’” Breyer has come to refer to proponents of this approach–namely, judges who use international legal precedents for context as they interpret the U.S. Constitution–as “comparativists…” [Link]

14 thoughts on “The milk of Paradise”