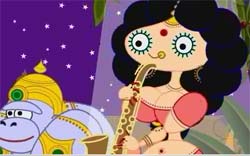 Watch the clips or, if the site is slow, see the end of the post to download.

This animation’s original title seems to have been The Sitayana. Like Anna’s feminist neologism, ‘Herstory,’ Paley had replaced Rama with Sita in the title. And she goes even further: Sita has the only speaking part in the entire animation. Rama is strong but silent, a Ken doll and essentially decorative, the inverse of most action flicks. But Paley stays reasonably faithful to the original text. Her Sita is still a maiden in distress rather than a Shrek-like princess-ninja.

Paley also inverts the Moulin Rouge formula. Instead of desi music in an American tale, she uses ’20s American music (one song even includes the banjo) in a quintessentially desi story. Her soundtrack choice is a classy touch; imagine someone doing a version like hip-hop Shakespeare, using Justin Timberlake as the soundtrack. 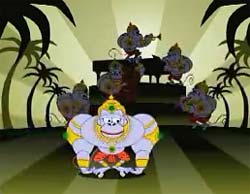 The fountains of rakshasa blood in part 1 are reminiscent of Kill Bill and anime. Paley makes excellent bhangra choices in the closing credits, and the dancing god is very cool, although the Medusa hair is really more of a Greek thing. The music-synchronized motion is lovely, from the high-stepping crescent moon to Hanuman’s dance. I’m also partial to her version of the golden deer.

However, using only music and no dialogue gets in the way of the narrative, you may need to already be familiar with the story to get it. And the art style gets repetitive after awhile – it’s not Paley’s fault, but I’m becoming bored with highly geometric, computer-assisted art.

Paley is looking for a desi remix artist:

Any chance you folks are tuned into… [the] desi music scene in NY? I’m desperately seeking a composer/remixer to do remixes and additional music for “Sita Sings the Blues.” Please let me know! 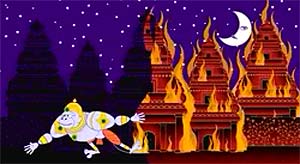 You can download the clips below using BitTorrent (get a downloader: Windows, Mac).