Apul’s post yesterday demonstrated the importance of the phallus in South Asian culture. As if on cue, Delhi officials announced today that they will be going ahead with plans to build the world’s tallest building on the outskirts of their city. From The Guardian Unlimited:

Local officials said the building in Noida would be 710 metres (2,330ft) tall – 202 metres higher than Taiwan’s Taipei 101, the current tallest building on the planet.

The skyscraper, said to have been designed to resemble the peaks of the Himalayas, is scheduled to be open for business by 2013.

“New York in the 30s, Malaysia in the 90s and China today all have used tall buildings to showcase their countries to the world,” said Hafeez Contractor, the architect behind the building.

“We want this building to show to the world what India can do.”

Ummm. How about working on poverty and literacy first. As you can imagine not EVERYONE is happy about this:

…some experts are critical of the new wave of Indian design, which they say simply mimics what others have done before and does not take account of local conditions.

“It’s not suited for Indian conditions. We do not have enough water. We do not have the uninterrupted electricity supply,” said Balkrishna Doshi, one of India’s most respected urban designers.

“The building will need its own power plant to make sure the lifts do not stop when the electricity does.”

Let’s see if plans for the building thrust forward or end up going limp when faced with pressure from the inevitable protests.

END_OF_DOCUMENT_TOKEN_TO_BE_REPLACED 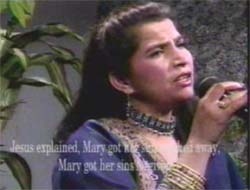 Afternoon TV is so funky sometimes. Today, the Christian channel was not showing a silver-haired white guy with expansive hand gestures, clad in a shiny double-breasted suit. Instead, it was showing a desi couple, the guy with those huge uncle glasses, singing a ghazal in Hindi, interleaved with clips of folk dancing.

The ghazal sounded completely traditional, but instead of being about love, melancholy or a Hindu / Muslim / Sikh God, it was about Jesus and Mary. ‘Prabhu,’ which usually refers to a Hindu or Sikh God, meant Jesus in this song, ‘Yehuda’ was Judas and ‘Yeshu’ was God. The song, broadcast by the South Asian Gospel Broadcasting Network (who knew?), was subtitled so New Yorkers could groove along. Talk about using the tools of the masters — this concoction merges the ghazal (which originated in Islam), Indian folk dancing and American-style televangelism. 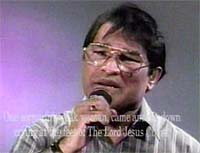 Pardon my parochialness, but I’ve never seen this before. Fusion? Talvin and Karsh got nothin’ on the church. Similarly, I’ve always been fascinated by how omnivorously religious many Hindus are. They practice it like metareligion where other ‘one-and-only’ deities are merely slotted into the pantheon. I often see Bollywood philms where a Hindu protagonist’s idea of the holy trinity is to pray at a temple, a church and a gurudwara all in the same day. And many Punjabi Hindus attend their local gurudwara instead of temple. I’d imagine it all drives hardcore monotheists crazy.

At least this gives Pakistan President Pervez MusharrafÃ‚Â and India Prime Minister Manmohan SinghÃ‚Â something to gab about when they meet in April, in case they encounter awkward silences.

The very awesome Turbanhead sent me the most deliciously evil link earlier today; it had to do with a college co-ed who needed to write a paper on “Hindu”.

This stellar, morally upright young woman required a little…help. And boy, did she get some.

Laura K: hi can i ask u a quick question Nate Kushner: what’s that? Laura K: i see in ur profile it says something about Hindu….i am a college student and i have to write a paper on Hindu is there anyway u can help me with that Nate Kushner: I can try. Laura K: have u ever written a paper on it before Nate Kushner: I am qualified, seeing as how it says Hindu in my profile. Laura K: well i am looking fro soemone to write me a paper i am more than willing to send u a check in the mail…money isn’t really an object to me…

By the by…the profile they both refer to states that Nate is interested in “Eating Hindu Sculpture.”

What follows, boys and girls, is a stern lesson about how you shouldn’t randomly IM comedy writers and ask them to do your all-nighter work.
END_OF_DOCUMENT_TOKEN_TO_BE_REPLACED 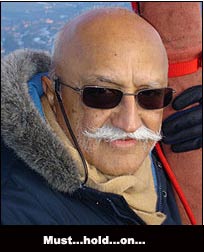 The BBC and several other news orgs report that Indian textile magnate Vijaypat Singhania (who seems to be a contemporary of Howard Hughes) will attempt in November to set a new hot air balloon altitude record:

The record breaking attempt will take place in November in the western Indian city of Mumbai (Bombay).

Mr Singhania, 66, will have to fly in a pressurised capsule in sub-zero temperatures to achieve a feat that he describes as MI 70K (Mission Impossible 70,000).

The 1.6 million cubic feet capacity balloon, which is being built in UK, is as tall as a 30-storey-building, according to the organisers.

The flight could take up to five hours – three hours to go up, and two hours to come down.

Officials from Federation Aeronautique Internationale (FAI), which ratifies aviation records, will be present.

“Vijay is going for the biggest feat – this is the heavy weight championship of hot air ballooning,” UK-based adventurer, Brian Milton, who is coordinating the flight told the BBC news site.

Now for my fellow aviation geeks out there, I have a bit more. As impressive an attempt as this will be, it pales by comparison to other high altitude feats. Singhania will be in a pressurized capsule (he’d die within seconds otherwise) but a century ago, similar feats were attempted sans pressurized cabin:

END_OF_DOCUMENT_TOKEN_TO_BE_REPLACED 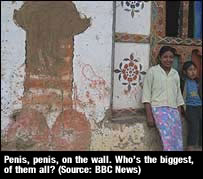 Driving from the country’s only airport in Paro to the capital city of Thimphu, graphic and colourful paintings of penises adorn the white-washed walls of homes, shops and eateries. In many places, pictures of dragons and soft drink advertisements showing a Bollywood actress jostle for space on the walls with phallic drawings. [BBC News]

An actress jostling with a penis could just be a still frame from any Bollywood flick, instead of evidence of a phenomenon. It’s not until you go down further on the article, that you realize the almighty deeock is found in even the most remote of Bhutan’s crevices:

Next to the traditionally painted wooden windows of the 80-year-old farmer, Dema’s, house is a bright red painting of a penis. Dema tells me she hired a professional artist to do it. “It’s to protect those who live inside the house,” she says…A few houses away lives 42-year-old Kinley. A simple drawing of a phallus adorns his wall. He tells me he painted it last year when he renovated his house. “It’s to ward off the evil eye. When people envy me or say bad things about me or my family, it takes away the sting,” Kinley says. [BBC News]

Kinley is doing something horribly wrong if a penis is taking away, rather than delivering, a sting. So why is everyone in Bhutan nuts about penis? The admiration is borne of religious lore:

Legend has it that Drupka Kinley would hit errant demons over the head with his penis to subdue them and turn them into protective deities. Today, several wooden penises are kept in the monastery. The longest, a brown wooden one with a silver handle, is the most important – it is considered a religious relic and is used for blessing the devout…The monk hits three young women devotees who come to pray at the monastery on the head with it. [BBC News]

Homesick Bhutanese monks (or just about anybody else) in Los Angeles can get that service for $30-40 (per head) on Hollywood Blvd.

END_OF_DOCUMENT_TOKEN_TO_BE_REPLACED

Foreign policy mandarin Fareed Zakaria has launched a new weekly show called Foreign Exchange on PBS stations nationwide (via SAJA). It’s odd to see the omnipresent guest turn host, even stranger to hear someone with a prep school, Anglicized Bombay accent hosting an American TV show. But, as always, neocons and Zakaria fans (I count myself among the latter) will wet themselves.

Watch the trailer. Here’s the show’s official site and bios of the Zakaria brothers.

Foreign Exchange with Fareed Zakaria: in Chicago on WTTW; in San Francisco on KQED; in Washington, DC on WHUT; in Seattle on KCTS; in Tampa on WUSF; in Denver on KRMA; in Oregon on OPB; in Kansas City on KCPT; in Salt Lake City on KUED; and others; check TV listings. 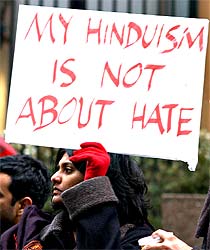 Among the anti-Modi and anti-Hindutva signs were some anti-Indian Army in Kashmir signs… the Kashmir folks had been piggybacking on the anti-Modi protest. They were politely banished to the other side of Seventh Avenue…

The passersby hurried by in a typical New York rush, some holding up their fingers in a peace sign, without slowing down… Stan asked him if it was true that two thousand people had been killed, the man very matter of factly answered, “sometimes people needed to be disciplined and taught a lesson…” They looked like they had been herded by the more affluent Indians, who were the organizers of the show. Unlike the folks who had been bussed in, most of these people weren’t wearing a tilak, and were barking orders in their walkie-talkies, and generally looking self satisfied. I spoke to a woman in a leather jacket, I asked her what she thought of the proceedings, which she had been watching with an eagle eye, she answered with great unsmiling certainty, “Modi will be the next great leader.”

While she was chatting up the better heeled delegates, a man draped in a saffron shawl stood on top of the steps, not speaking to anyone and standing very still. He seemed to be committing every protestor’s face to memory… At that point a very large man in a trench coat and hat told me to clear the sidewalk. he was the detective in charge. He was the spitting image of Orson Welles in “A Touch of Evil.”

On my way home, I shared a bus ride with some middle aged Gujarati people who had gone to the event, they seemed like nice people. It was chilling to think that they were unmoved by the brutal killing of so many people…

‘Modi will be the next great leader’? Where do they find these people, under the same rock as David Duke groupies? 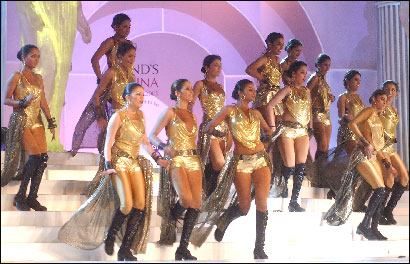 A sizzling performance by dance group during the PondÃ¢Â€Â™s Femina Miss India 2005 in Mumbai on Sunday ( TOI Photo/ Uma Kadam. )

I’m so confused. And yes, I’m American-born. I’ve gone to several brown cultural shows at major Amreekan universities, and the filmi/”fusion” dancers don’t look like this. Metallic hot pants and Come-prance-with-me-in-Switzerland-in-the-rain boots? What the-? END_OF_DOCUMENT_TOKEN_TO_BE_REPLACED

Several news orgs chime in on the latest press release from the Census Bureau. As reported on CNN:

Black and Asian women with bachelor’s degrees earn slightly more than similarly educated white women, and white men with four-year degrees make more than anyone else.

The bureau did not say why the differences exist. Economists and sociologists suggest possible factors: the tendency of minority women, especially blacks, to more often hold more than one job or work more than 40 hours a week, and the tendency of black professional women who take time off to have a child to return to the work force sooner than others.