I didn’t realize this but apparently even the U.N. has a union. Specifically the U.N. Staff Union. Yahoo News is reporting that the UN staff are preparing to cast a historic no-confidence vote against Nobel Prize winner and U.N. Secretary General Kofi Annan.

UN staff are expected to make an unprecedented vote of no confidence in Secretary-General Kofi Annan, union sources say, after a series of scandals tainted his term in charge of the world body. The UN staff union, in what officials said was the first vote of its kind in the almost 60-year history of the United Nations, was set to approve a resolution withdrawing support for Annan and senior UN management. Annan has been in the line of fire over a series of scandals including controversy about a UN aid program that investigators say allowed deposed Iraqi dictator Saddam Hussein to embezzle billions of dollars.

Okay, but this kind of news will eventually be found all over the mainstream press. Why are we reporting it? Well apparently the oil for food scandal wasn’t the straw that broke the camel’s back.

Staffers said the trigger for the no-confidence measure was an announcement this week that Annan had pardoned the UN’s top oversight official, who was facing allegations of favouritism and sexual harassment.

The union had requested a formal probe into the official, Dileep Nair, after employees accused him of harassing staff and violating UN rules on the hiring and promotion of workers.

Dileep Nair is an official from Singapore who denies any wrongdoing of course. The U.N. workers aren’t buying it though, and haven’t forgotten previous things they were upset about. END_OF_DOCUMENT_TOKEN_TO_BE_REPLACED 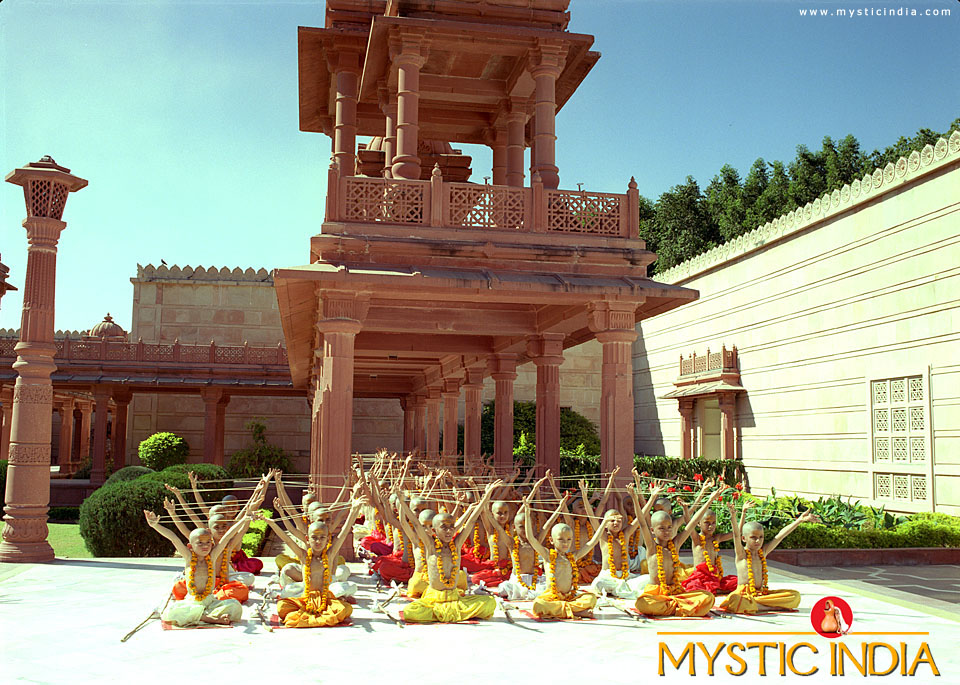 Ashok sends us this heads up via the Sepia Mutiny Tip Line (a red phone actually rings at our North Dakota headquarters). A new IMAX movie dealing with one boy’s spiritual journey across the landscapes of India is set to be released soon and boasts a cast of 45,000.

On June 29, 1792, Neelkanth begins his journey of awakening. Having resolved to embrace the challenges of nature, he leaves his home in the city of Ayodhya. Neelkanth walks alone into the cold stormy night, wearing nothing over his shoulders or under his feet, carrying nothing – no maps, no money, no food – except inner courage, confidence and a silent spiritual strength. At the Saryu River, he enters the cold, raging current. Neelkanth is swept away, leaving behind all that was familiar.

Neelkanth’s footprints begin to map the length and breadth of India – its dense jungles, fertile plains, majestic mountains, mighty rivers, and peaceful coastlines. Flourishing for more than 8,000 years, this land has been home to an ancient and highly advanced civilization. Neelkanth’s walk would last for 7 years, 12,000 kilometers, covering every corner of India.

I note with interest that the filmmakers have decided upon Ayodhya, which is at the center of all kinds of contemporary bloodshed, as the town where this young yogi comes from. Will the film try to be objective and promote unity, or will it stress the “Hinduness” of India instead of it’s diversity? The film is being produced by BAPS:

BAPS [Bochasanwasi Shri Akshar Purushottam Swaminarayan Sanstha], an international NGO, has a rich experience of presenting Indian culture to over 55 million people worldwide through its 9 cultural festivals and 3 permanent exhibitions at Akshardham Â–Gandhinagar and Shri Swaminarayan Temple – London and Nairobi. As part of its continuing activities, In early 2001, BAPS decided to make a film that would show the true wealth of India Â– its culture, its heritage and its wisdom. To make the film more interesting and take the audience into it with a story, it was decided to present India through a unique inspiring person Â– Neelkanth. This would give the opportunity to present a docu-drama rather than a documentary.

As all IMAX movies, this one promises to be visually stunning. A preview of the film can be viewed here (although the link seems to be temporarily down).

CNN is running a new series of humorous ads, one of which features medical correspondent Dr. Sanjay Gupta unintentionally distracting a female viewer.

In light of the recent brouhaha surrounding Terrell Owens’ skit on ABC’s "Monday Night Football," this inter-racial coupling is sure to ruffle some feathers. The sexually-charged tone of the ad alone should raise the ire of FCC dick-tator Michael Powell. Fallout will soon commence.

Is this my lame attempt at creating controversy where none exists? Is the title of this post outrageously misleading? The answer to both questions: yes (head pointed downward in dirty, dirty shame).

One thing’s for sure — the pro-Sanjays lobby over at Mahoot will be quite pleased.

The page that hosts the ad uses one of those unfriendly Flash interfaces, so there isn’t a direct link to the video. You’ll have to skip past the intro, and then possibly click around a bit. Also, Anderson Cooper’s ad includes a brief mention of India.

END_OF_DOCUMENT_TOKEN_TO_BE_REPLACED

Just in time for the PM’s visit, it’s “No globes for you”!

New Delhi, Nov. 10 (ANI): The Delhi High Court today put an interim ban on the import and marketing of Chinese-made toy globes in India, saying that they incorrectly represented the country’s map by not showing Jammu and Kashmir as part of its territory.

A Bench comprising Chief Justice B.C. Patel and Justice B.D. Ahmed directed the government not to permit the circulation of Chinese-made globes in the market.

Yes, but can I buy one on EBay now? Should I? or does it not work like that?

Rediff.com is reporting today that film distributor Miramax has postponed the U.S. release of Gurinder Chadha’s "Bride and Prejudice."

The film is now scheduled to open during the second week of February, moving from its original release date on Christmas. The change is bad news for the film, because it essentially pulls it out of contention for most major awards.

On the bright side of things, the postponement offers potential viewers an extra couple of months to read the film’s source material, Jane Austen’s "Pride and Prejudice." For some of us, it provides an extra two months to think about maybe buying the Cliff Notes, but eventually relenting to a similarly-priced bottle of Thunderbird.

END_OF_DOCUMENT_TOKEN_TO_BE_REPLACED

That is thankfully not the name of a new Hollywood movie. Prince Charles it seems has taken exception to the Blair government’s praise of the Indian and Chinese education systems. Specifically, Gordon Brown who is Blair’s Finance Minister, said last week:

“Within a decade, five million US and European jobs could be outsourced. And all the time China and India are upgrading their [IT] and science skills. They are producing 125,000 computer science graduates a year, and the UK [is producing] only 5,000,” Brown said.

Just last week the government agency e-Skills UK criticised the IT training industry for being unequal to the task of filling the UK technology skills gap.

Brown added that to “fail to confront or complacently side-step” global competition would cause the UK to be left behind.

Britain’s philosopher-Prince Charles has hit out at the Blair government’s envious warning refrain on the sheer volume and calibre of India’s academic successes, by accusing educationists of seeking to turn students into “better robots”.

END_OF_DOCUMENT_TOKEN_TO_BE_REPLACED All we are sayyyyying…is give peas a chance:

A thousand Indian troops withdrew from the disputed territory of Kashmir yesterday in a goodwill gesture aimed at fostering a new peace in the province.

The move was timed to coincide with a visit to Kashmir by Dr Manmohan Singh, India’s prime minister, and is the latest in a series of confidence-building initiatives between India and Pakistan.

Through a bullet-proof screen in Srinagar, India’s PM stated that he “extended the hand of friendship” to Pakistan.

…Last month Pakistan’s president Gen Pervaiz Musharraf seized the initiative on Kashmir by floating a plan to divide and demilitarise the region, calling on both sides to take radical steps towards a settlement.

Initially India responded coolly, but has reciprocated in kind with a symbolic reduction in troop numbers.

Psychiatrist and actor Reef Karim, who stars in CourtTV’s “House of Clues,” has landed on People Magazine’s annual list of “Sexiest Men Alive.”

Karim recently co-starred in the desi film, “Flavors,” and is an addiction specialist at UCLA Neuropsychiatric Institute. He also makes expert appearances on VH1’s “The Love Lounge,” MTV’s “Loveline,” and NBC’s “The Today Show.”

Unfortunately, my favorite for the list, gangsta’-bandit Veerappan, failed again to make the cut. He is unlikely to do so in the future, given his newfound disqualification from the “alive” portion of the title.

The magazine, which awarded its cover to actor Jude Law, hits newsstands this Friday.

END_OF_DOCUMENT_TOKEN_TO_BE_REPLACED

[T]he industry is chaotic, in part due to film-makers being secretive about films and where they are shooting, in order to avoid others stealing their ideas. There are no call sheets, no shooting schedules and no shooting scripts. Crew are rung up the night before. In India labour is cheap, but there is a lack of organization; it is the biggest organized chaos in the world.

Shimizu looked at us, smiled and said, ‘Okay.’… Then I turn around and notice that the camera tracker’s already moved, the camera has shifted and everyone was already in place. It was the most efficient crew I have ever worked with.”… “For actors, the American film system is medieval. You’re either working and coddled or unemployed and ignored. But in Japan actors are just another member of the crew…”

But there are a couple of things both cultures agree on, the muharrat…

“In Japan, there is always a purification ceremony to ensure safety of the filming and the crew,” says Ichise. “We also pray for the success of the film…”

“There’s something wonderful about everyone paying their respects on the set by taking their shoes off when they enter,” observes [Sarah Michelle] Gellar. 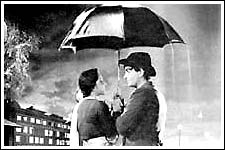 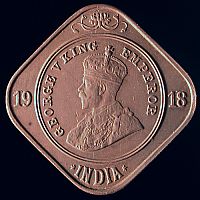 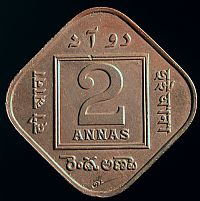 This lovely colonial coinage from the British Raj comes to us via Prashant Mullick. On top, King George the Fifth; on bottom, ‘India.’ Sacre bleu! How apropos.

By the way, one Anna is all anyone can really handle