According to the Navhind Times it seems that many Sikhs from Afghanistan presently living in India, want to make their way back to Afghanistan through Pakistan, now that the country is stable enough for them to return to their businesses. What were up to 500,000 Sikhs doing in Afghanistan before the violence of the 90s and 9/11?

Afghan Sikhs and Hindus were predominant in AfghanistanÂ’s unique Â‘money marketÂ’ working as commission money changers, while others had shops and trading establishments.

However, after the fall of Najibullah regime, the Sikhs and Hindus fell prey to bloody inter-Mujaheddin warfare.

Â“For the past few years we have been trickling back and trying to reclaim our properties. We are facing lot of hardships,Â” the Sikh leaders said.

The Indian government however is not receptive to the idea of the Sikhs traveling trough Pakistan.

The Indian government had imposed a ban on overland entry of Afghan Sikhs following warning from intelligence agencies that Pakistani agencies were trying to infiltrate Sikh extremists in the garb of Afghan Sikhs.

Restrictions had also been enforced as after the fall of the Taliban regime in 2001, Afghan security agencies had come across tell-tale evidence of some Sikh youths undergoing arms training in ISI-run camps near Kabul and in northern Afghanistan.

Assuming the article is refering to Al Qaeda’s terrorist training camps, that’s the first time I have heard that there were any significant number of Sikhs in those camps. In any case, it must be seen as a positive sign when people who fled a country start to return.

As the election looms menacingly closer its time to squeeze every last vote out of the electorate. Bush stays true to form by spending his time making insipid commercials starring wolves to scare us, while Kerry panders to every group he can think of. NCM reports:

Democratic challenger Sen. John F. Kerry, who is locked in an epic battle with incumbent President George W. Bush in the November presidential election, says he would “make every effort to involve Indian Americans at the highest levels of my administration.”

In an exclusive Q&A in the Sept./Oct. issue of Indian Life & Style magazine published by India-West, the candidate, who is in a dead heat in the race to the White House, says, “It is long past time that Indian Americans be fully represented in the government.”

But what kind of position?? That is the million dollar question. I would love to apply for the type of position that Karl Rove has in Dubya’s administration. Can you imagine? Abhi as head of propaganda in a Kerry presidency? Oooh, the possibilities.

Here are some purely subjective impressions of my time so far… Don’t expect a vacation in the ordinary sense of the term, as the main sight is India itself. None of the listed sights are the true highlights. What was better than I had expected: 1. The overall friendliness, sparkle and wit of the Indians I have spoken to.

Delhi’s canoodling commandos suffer coitus interruptus: Oddly enough, several religious shrines sit within high-security zones at Indian airports. Claiming they were visiting a Sufi shrine, two security personnel rode a scooter into the path of a flight taking off from Delhi in the early morning (via the Acorn):

Thursday’s security breach at the Delhi airport, involving two security personnel who drove a scooter onto a runway as a Royal Jordanian Airlines aircraft with over 200 passengers on board was preparing to taxi along it, has raised eyebrows in intelligence agencies.

The Times of India has more:

Since the shrine is only open in the afternoon, and only with a special permit, and the female constable was not assigned to the airport, I’m guessing that security was literally screwing around. As the queen of tawdry double entendres said:

BBC photo essay on the Dussehra and Durga Pooja festivals (via Mango Latte): 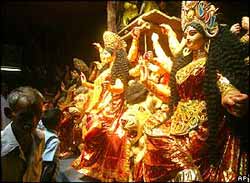 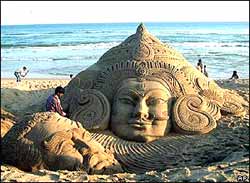 END_OF_DOCUMENT_TOKEN_TO_BE_REPLACED

The New York Times (free subscription required), in its Sunday edition has run an interesting take on the role of the Indian/Hindu caste-system in the Indian diaspora in America. I use a hyphen because followers of non-Hindu faiths found in India (Sikhism, Islam, and Christianity etc.) continue to have remnants of the caste system as part of their cultural traditions as referenced in the NYT piece’s example of Pinder Paul, who the Times describes as a

“spirited 50-year-old Punjabi Sikh (the Sikh faith absorbed some caste distinctions) who came to New York City in 1985 and worked as a dishwasher at Tad’s Steaks. Now he and his wife spend seven days a week running the Chirping Chicken outlet he owns in Astoria. He could cite no instance of outright discrimination, but said looks and gestures sometimes betray upper-caste condescension. “Our friends who came here from India from the upper classes, they’re supposed to leave this kind of thing behind, but unfortunately they brought it with them,” he said. Yet in a paradoxical demonstration of the stubborn resilience of caste, Mr. Paul is active with a local Dalit group and said he would prefer that his son marry a Dalit. “We want to stay in our community,” he said.”

The Times use the story of Dr. Bodh Das as their lede, a “silver-haired cardiologist in the Bronx,” who they compare to Tivye from Fiddler on the roof, and his attempts to ensure that his three daughters marry into the same familial caste they were born into.

As Dr. Das’s experience shows, the peculiarly Indian system of stratifying its people into hierarchical castes – with Brahmins at the top and untouchables at the bottom – has managed to stow away on the journey to the United States, a country that prides itself on its standard of egalitarianism, however flawed the execution. But the caste system, weakening for a half-century in India, is withering here under the relentless forces of assimilation and modernity. While it persists, its vestiges today often seem more a matter of sentiment than cultural imperative. Sometimes, the caste distinctions, recognizable by family names and places of origin, linger as a form of social snobbery. Keerthi Vadlamani, a 23-year-old chemical engineer from an affluent Brahmin family in the south-central Indian city of Hyderabad, said, “Some people are stupid enough not to mingle with a Dalit, to cold-shoulder them. “You won’t invite them home, you won’t go over to their home,” he said. Other upper-caste Indians here say that they do not bother to probe someone’s caste and that most compatriots will do business with anyone. Few Indians would admit to such behavior as refusing to eat in a restaurant because its food was cooked by an untouchable, something many upper-caste Indians might have done 50 years ago. Mostly caste survives here as a kind of tribal bonding, with Indians finding kindred spirits among people who grew up with the same foods and cultural signals. Just as descendants of the Pilgrims use the Mayflower Society as a social outlet to mingle with people of congenial backgrounds, a few castes have formed societies like the Brahmin Samaj of North America, where meditation and yoga are practiced and caste traditions like vegetarianism and periodic fasting are explained to the young.

The Times has an interesting take on the whole thing, but kudos to them for exploring a facet of the Indian diaspora that has remained, at least to my knowledge, relatively untouched by mainstream journalism.

END_OF_DOCUMENT_TOKEN_TO_BE_REPLACED

What do I mean? Well anyone that has traveled abroad extensively or even within the U.S. knows that no matter where you go, you will encounter a flock of Japanese tourists with cameras slung around their necks. Rediff.com points to trends showing that soon Indians may be the ubiquitous tourists:

But why are countries going all out to attract Indians? “They spend money,” says Edward Chew, spokesperson of the Singapore Tourism Board. Last year, Indians were the highest spending travelling community in Singapore with an average daily spend of S$200-300.

They beat the Japanese who till the year before last were the highest spenders. Singapore recorded 309,383 arrivals from India last year of which 34 per cent were leisure travelers. However, because of SARS (Severe Acute Respiratory Syndrome), 2003 was a bad year for tourist traffic. In 2002, 375,000 Indians visited Singapore, which was an increase of 10.5 per cent over 2001.

The fact that Indians splurge on shopping, of course, makes them the favourites of various countries. But shopping isn’t the only thing they spend heavily on.

Great. Not only are we stereotyped as convenience store clerks and cab drivers but now this new potential caricature as well.

About two months ago I participated in a half-hour telephone survey about my smoking history and habits. The survey was specifically targeted for Indian Americans living in California, and I believe it was run by one of the UC campuses. The questions ranged from whether I had ever chewed paan, to how accepting I would be of my eventual offspring dating someone of another race. I do not know for sure if this new study reported by OnlyPunjab.com is associated with that same survey or not, but the results are worth examining:

California’s Asian Americans smoke at a lower rate than the state’s population as a whole, but the better an Asian California woman’s English, the more likely she is to smoke.

“Because one of every three Asian Americans in the United States lives in California, these findings have significance well beyond the borders of our state,” said Moon S. Chen, Jr., professor of public health sciences at UC Davis School of Medicine and Medical Center and principal investigator for AANCART, an $8.5 million project funded by the National Cancer Institute.

Why is it that the more assimilated (I correlate this only with English fluency) an Asian woman, the more likely she is to be a smoker? This is particularly curious when considering the following:

The original press release can be found here.

Newsweek International editor Fareed Zakaria was on the Daily Show discussing Iraq with Jon Stewart a couple of nights ago. He’s supportive of the initial war aims but critical of its execution. Check out the video.

Here’s a previous post where Zakaria compares U.S. tactics in Iraq to Britain’s tactics in India.