Following the lead of Hooters, Starbucks says it will expand into India soon, trying to reverse hundreds of years of tea plantation history dating back to the East India Company (thanks, Super Jagjit!):

“China traditionally has been a tea-drinking country[,] but we turned them into coffee drinkers,” Schultz told a gathering of analysts earlier this month…

But their Asia marketing director, speaking not to Wall Street but to Indian consumers, is singing a gentler hymn:

“India is a tea-based culture. We””””re not saying coffee is a substitute. We””””re saying Starbucks is a place to hang out, to eat and drink, to see and be seen.”

In other words, a place to flirt. And, in fact, gourmet coffee cafes serve exactly that function in Indian cities today:

“With the liberalization of the economy, there are a large number of young Indians with good jobs and attractive incomes,” said Banerjee. “Many still live with their parents. So their income is largely disposable and they need to spend it on something.“

Methinks the key part of that quote is ‘many still live with their parents.’ Cafes function as extended living rooms in space-impaired Manhattan and as libidinous hotspots in privacy-impaired India. They’re just the place for your silken mocha pick-me-up. 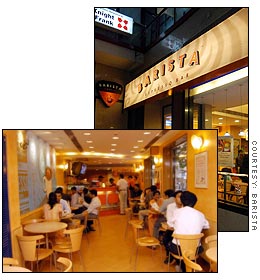 Barista””””s menu features everything from a latte to cappuccino, caramel cafe, cafe mocha, flavored coffee and deserts like brownies and cakes. The company also recently introduced Wi-Fi access in 35 locations. Music downloads could be next.

But I’ve figured out that Starbucks’ master plan to beat the competition. In an obvious bid for the Punjabi market, Starbucks is releasing an alcohol-based liqueur:

The Seattle-based coffee shop chain, along with… Jim Beam… is developing a premium coffee liqueur to be sold in bars, restaurants and liquor stores — but not in Starbucks”””” 7,800 retail locations… The new liqueur will compete with… sweet-tasting Kahlua and Bailey””””s Irish cream…

I’m looking forward to the inevitable Starbucks Black Label. The company also signed a deal recently to buy Arabica beans from India (shouldn’t those be Indica beans?), its first bean sourcing deal from outside South America. The source, Tata Coffee, is Asia’s largest coffee producer, with 17,300 acres of coffee plantations in Karnataka.

Mmm… I’m looking forward to the day I can order spicy chai with kesar and pista the way Mom makes. Maybe Starbucks will even fix their redundant naming. I speak, of course, of ‘chai tea.’ Sure, calling something by its Hindi name may give it a patina of otherness, a certain masti. But calling it by both names at once? That’s just buddhoo silly.